Russell Crowe is an ass. Everyone knows this. So when he recently went on a rant about how there are plenty of parts for women in movies so they should just shut their yaps and “act their age” no one was surprised by the medium or the message. As long as there’s been movies, there’s been sexism  and by god, where sexism goes so does ageism.

Looking at this year’s Oscar nominations it was pretty clear to me that meatier roles go to men, but I’m not going to sit here and lament the missed opportunities when instead I could be celebrating the success. 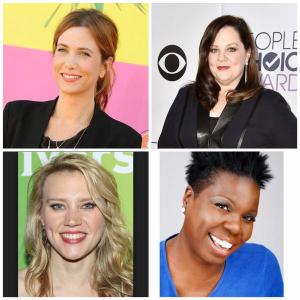 Earlier today, Paul Feig posted an untitled photo to Twitter featuring Kristen Wiig, Melissa McCarthy, Kate McKinnon, and Leslie Jones. Feig provided absolutely  no comment but fans were quick to speculate that this was the cast of his much-discussed reboot of The Ghostbusters franchise. McKinnon and Jones are both current members of SNL while Wiig and McCarthy are already Feig collaborators, having co-starred in Bridesmaids, the highest grossing domestic R-rated female comedy of all time, edging out Sex and the City (2008).

Meanwhile, at Sundance,  Emily Nussbaum, award-winning critic for the New Yorker, moderated a panel of “Serious Ladies” featuring the uber-talented Wiig, Jenji Kohan (who wrote for Sex and

the City and Gilmore Girls before creating Orange Is the New Black and Weeds), Lena Dunham (creator and star of Girls) and Mindy Kaling (writer\producer\star of The Mindy Project). Although they’re all at the top of their game, they all shared stories about how tough it was to break in. Kohan recalled male-dominated writers’ rooms where one cave-dweller told her  “If God had meant women to be in a writer’s room he wouldn’t have made breasts so distracting.” Kaling discussed the pressure to be a role-model versus the artist’s craving to push the envelope and maybe even offend. Sometimes feminism means creating a female character that isn’t necessarily “likeable.”

Dunham, who recently released a memoir, spoke about the difficulty women face in being 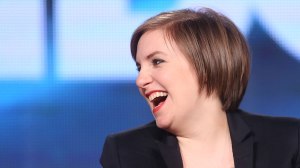 mistaken for the characters they play (and wondered why Woody Allen and Larry David don’t get pigeonholed in quite the same way). She hopes to one day see women outnumber men in their profession – “That would be my favourite, if guys some day were to say, ‘It’s impossible to get into Hollywood! It’s a women’s club!’ ”

motherhood, a notion she challenges with the huge success of her show, Orange Is The New Black. That series, a Netflix original, won big at the Screen Actors Guild awards on Sunday. Uzo Aduba took home Outstanding Performance by a Female Actor in a Comedy Series that night (she plays “Crazy Eyes), and gave a heartfelt speech. But the best part was the love and support coming from the OITNB

table – it’s always heartening to see women cheering each other on. Aduba was back on stage before long – the show also won Outstanding Performance by an Ensemble in a Comedy Series, wrestling away the honour from Modern Family. What a great sight to see so many strong and talented ladies on the stage at once.

There are still mountains to climb for women in Hollywood, but if you look around (or follow our Twitter feed – @assholemovies ) you’ll find 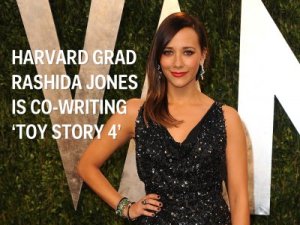 brave mountaineers everywhere. Just today it was announced that Toy Story 4 would be making its way to theatres in 2017 and that Rashida Jones and her writing partner Will McCormack would be tapped for the screenplay. Although they only have one previous credit to their names (Celeste and Jesse Forever), John Lasseter insists he “wanted to get a strong female voice in the writing of this.” This is a nice change from Pixar’s usually male-dominated animated lineup (Buzz, Woody, Nemo, Mike, Sully, Wall-E, etc) and a step in the right direction for us all.

8 thoughts on “Women in Hollywood”