Well, I liked it more than I liked Get Hard!

Josh Gad is a dream. Maybe not so much in this particular vehicle, but he’s a dream. I was lucky enough to catch him on Broadway when he originated the role of Elder Cunningham in Book of Mormom. And he was a goddamn dream. So I will follow him to the ends of the Earth. I will follow him into a Disney princess movie, and apparently, into a film that feels like the leftovers of an Owen Wilson and Vince Vaughn comedy.

And while Josh Gad is lovely and Kevin Hart is lovely, they don’t make quite the same team as the old Wedding Crashers did. Darn. 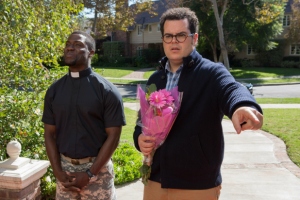 It is funny though, it’s just not quite charming. Doug (Gad) is getting married in two weeks and the jig is up. Those friends of his that will fill out the astronomical bridal party? They’re all just figments of his imagination. Little Dougie doesn’t make friends so easily. But his wedding planner knows just the guy. Jimmy (Hart) makes his living helping out friendless men. He provides the services of a best man, and if need be, the whole damn wolf pack. It’s a tall order in just two weeks, so crazy it even has a name – the golden tux – and to pull it off is gonna take a miracle.

Good thing Doug has for some reason claimed that his best friend Bic is a priest! So poor Kevin

Hart shows up to family functions pretending not only to be BFFs with a guy he’s only just met, but a super religious one as well. Not awkward at all.

The plot is tired. It’s so tired. Like, anorexic tired. But the bridal party is such a weird, motley crew that you can sow some real laughs there. There’s no racial tension here, no rape jokes, but there is Cloris Leachman on fire, so there’s that.

Are your expectations sufficiently modest? Do you just want to sit on your couch and have some moderate laughs without needing to think? Are you hoping to go to bed later that night without really remember what you watched? If so, have I got the movie for you – generic and totally harmless, and maybe just funny enough.

7 thoughts on “The Wedding Ringer”