Tangerines – In a messy war between Georgians and Chechans, an old man who makes boxes

and his friend who grows tangerines are having a hard time getting their boxed tangerine business off the ground. But then the factions start fighting right on their doorstep and they pull a lone survivor, a Chechen, from the wreckage. Their plan is to nurse him back to health while burying the dead, and that’s when they discover that one of the dead isn’t quite dead. And that’s how they end up nursing sworn enemies back to health under the same roof – each vowing to kill the other as soon as he is able to get out of bed unassisted.

J’ai tué ma mère (I Killed My Mother) – This is a Canadian film, french language of course, so not actually foreign to me, but will be to most of you. Xavier Dolan wrote this when he was 16, and began starring and directing in it when he was 19 or 20.

It’s about the tenuous bond between a single mother and her teenaged son, a relationship Dolan has described as “semi-autobiographical.” His performance is petulant but perceptive and it made me wonder if he knew that he’d made the mother out to be less than a villain, and the son a spoiled brat. I have a feeling he has more of a sense of humour for these two than they could ever muster for themselves. And he styles them with his odd composition notes, a dash of black and white here, a dollop of characters barely in the screen there. He’s got a penchant for artistry that’s only being hinted at here, but watch out for Laurence Anyways, and Mommy, you haven’t seen the last of this talented young director. 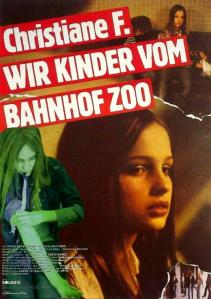 for some citrus wars, or matricide at the very least. I started watching this one about a month and a half ago, back when it was German language film week, and I just couldn’t hack it. And you know what? I still can’t. Who can watch a little 13-year-old girl running around in clown makeup and heels WITH FUCKING SOCKS , thinking she’s all grown up even though she doesn’t even have pubes (which we can verify because everyone has TERRIBLE UNDERWEAR), fucking around and shooting up with goddamned dirty needles, and then whoring to pay for it, boasting she can do 7 in an hour, condoms optional. No. Just no. And? It’s apparently based on the real Christiane’s memoirs. So, live with that. Also? The worst part was totally the socks.