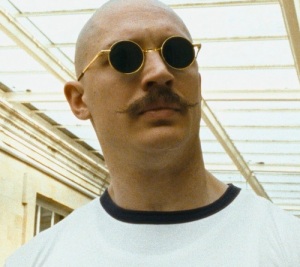 Tom Hardy portrays England’s most notorious prisoner in a film that, through theatrical fictionalization, becomes an indictment of celebrity culture and a tribute to the cult of personality.

A young man named Michael Peterson robs a post office and ends up serving three decades in solitary confinement. How does this come to pass? Well it turns out that in prison, Peterson adopts a survival mechanism we in the business call “being a truly awful person.” He relishes his bad reputation and works at it, actively.

He fights prisoners and guards equally, Hardy often seen “lubing up” with war paint, aka, butter. A real problem prisoner, he’s sent to serve out his sentence, now doubled, in segregation. Upon his release, he takes up bare-knuckled boxing and a pseudonym more suitable to his ultra-violent alter-ego: Charles Bronson is born (again). A mere 69 days later, he’s back in prison and worse than ever, instigating some pretty crazy hostage situations if the movie can be believed.

The film does an interesting thing where it has these asides where Hardy appears to be in a one-man Broadway show, painted into the various characters we’re introduced to, proud as a

peacock to show off his many crimes, his escalating violence (in reality, he is still imprisoned to this day). The surreal soliloquies are little bites peppered among a buffet of horrid reality. It reminded me of a freak show, though I suppose that’s the message colouring the medium (or was it the strongman’s physique, or the ringmaster’s mustache?) I wasn’t always sure what to make of it and felt it was probably a bit overstylized, but if nothing else it is trying to be genre-defying, and it is.

The film makes no excuses for inexcusable behaviour, which is fortunate, but still manages to leave some upset in its wake – that old art vs exploitation theme snakes its way into this movie, and it’s hard to shake. But it is firm in one respect: whatever the spectacle, Tom Hardy is undoubtedly the star.

On a related note, the real prisoner Charles Bronson was transferred to Parkhurst in 1976 after trying to poison the guy in the cell next to him. At his new facility, he met the Kray twins, who would become his lifelong friends – “the best two guys I ever met” (not actual good guys, of course, they were England’s mafia). Tom Hardy is about to portray both Kray twins in the movie Legend, set to screen next month at TIFF.