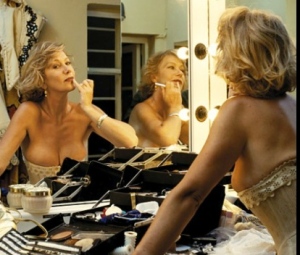 Helen Mirren, the 70-year-old British bombshell, has announced that her breasts have gone into retirement. No  more nude scenes, no more topless shots – “My pleasure pillows are purely for my husband now.”

Helen’s boobies first appeared to us in 1969’s Age of Consent and as recently as a 2010 (nude) photo shoot for New York magazine.

They were also featured in a 2011 SNL skit entitled “Helen Mirren’s Magical Bosom.”

Now, as often as I might cringe when a woman takes her top off in the movies (because why? Is this really necessary? Is this even nice?), I have no problem imagining that every single time Helen did it, it was from a

position of power. The woman, and her cleavage, are feminist icons.

In fact, you may note that she achieved Damehood from the Queen, in the Order of the British Empire for services to the performing arts in 2003, the same year she appeared topless in Calendar Girls. Coincidence? 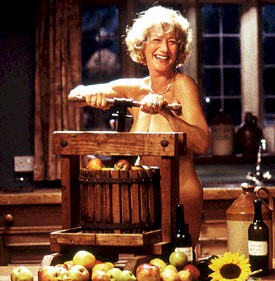 Helen Mirren is gorgeous at any age, but her confidence and sassiness in her 70-year-old skin is what makes her sexy, and damn is she sexy.

19 thoughts on “A Farewell to Helen Mirren’s Fabulous Tits”