It almost feels inappropriate to laugh at this movie. Wiig plays Alice, a woman with a whole deck of diagnoses, the most recent being Borderline Personality Disorder, but still a few cards short.

A side note about Borderline Personality Disorder: BPD is nothing to mess with. People with BPD suffer from wildly unstable relationships and behaviours, often with brief psychotic episodes. They are prone to reckless and impulsive behaviour, and have problems regulating their thoughts and emotions. BPD often occurs with other mental health disorders like depression, anxiety, and self-harming or suicidal behaviours. It’s serious stuff.

And yet this movie dares to ask: what happens with Alice, an unstable woman suffering from BPD, wins millions upon millions of dollars in the state lottery?

Well, she goes off her meds, for one. 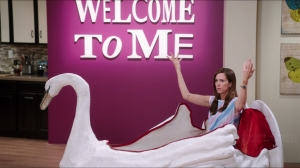 Next: she buys herself a talk show so she can be just like her idol, Oprah Winfrey. Only Alice doesn’t want to interview celebrities or do guest bedroom makeovers. She has only one topic in mind: ME. Or rather, her. Wouldn’t it be weird if Kristen Wiig made a movie and all she did was talk about me? Yeah, not this time, unfortunately. This time it’s all about Alice.

Wes Bentley and James Marsden appear as the owners of the TV network that’s so hard on its luck it makes a deal with someone who is clearly mentally unbalanced – and since Charlie Sheen can still get work, I guess we have to find this perfectly plausible. Jennifer Jason Leigh, also a network exec, is less enamoured with her.

Meanwhile Linda Cardellini plays Gina, the unsung best friend of Alice, who never gets any 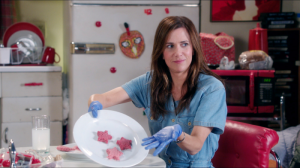 respect. She’s a far better friend than Alice deserves or knows what to do with, and is a serviceable conduit for audience pathos.

Is it funny to watch an emotionally confused woman re-enact moments of her childhood while reigning her TV kingdom from a throne that looks suspiciously like a swan? It is. But it’s a one-note kind of funny, which nothing in the way of plot of character development. The screen writer looked up BPD but didn’t have the balls to go all the way. Wiig is, as always, willing to be awkward as hell. And she is. It’s a good performance, and if you like Wiig you will inevitably find this movie enjoyable if not particularly memorable. Is it a compliment to her to say we always knew she had dark reserves of madness? She moves in this role fearlessly and does more than the script asks of her. 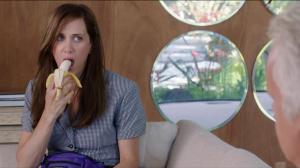 I’m not entirely sure if director Shira Piven was going for offbeat drama or dark comedy, but the end result is nearly as uneven as Alice herself. It makes for an uncomfortable revelation of selfie-centered, emotional exhibitionists when self-examination, and maybe self-care, are what are called for. Even more condemning: that Alice is so out of control, and the “well” people around her take so little notice.

If you’re looking for some quirky Netflix and chill, you’ll find this one under W.

21 thoughts on “Welcome To Me”