We saw this movie against our wills. It was part of a double bill we had no interest in seeing but it was at the drive-in on the warmest, most starry, most perfect drive-in night of the year, and it couldn’t be helped.

The premise: a young woman named Lou (Emilia Clarke) goes to work at a castle, caring for a recently quadriplegic man, Will (Sam Claflin). Cut down in the prime of his life and

unable to accept his new limitations and circumstances, Will is surly and depressed. It makes for an unpleasant work environment for Lou but her financial desperation keep her hanging on, just barely, and that’s BEFORE she finds out he’s wickedly suicidal. Will’s in favour of going to Switzerland for end of life treatment now that life’s rather small and joyless, but he’s promised his parents six months, so he’s gritting his teeth as he suffers through them. Lou’s going to save him of course, with her quirk and her chattiness and her colourful penchant for terrible shoes, even if she has to make him fall in love with her to do it.

First of all, this felt very much like a poor man’s rip off of The Intouchables, in which another unlikely friendship blossoms between quadriplegic and caregiver, also marked by a disparity between social class. But I’d heard that Bryan Cranston and Kevin Hart were set for that particular  (unnecessary) remake (read: lazy Americans hate subtitles!). I guess this one justifies itself by having a predictable and pedestrian romantic twist that even the dude’s mother (Janet McTeer!) sees coming from a mile away, even without help from her turret. Because again: they live in a freaking castle. It’s a good thing that disabled people

are always so ridiculously wealthy. Life might actually look a little bleak without the tricked out vans, front row orchestra seats, fully accommodated living spaces, round the clock care, and even accessible tropical travel destinations. It kind of makes you wonder whether these poverty-stricken caregivers are falling in love with their patient, or with their patient’s lifestyle. And in this movie at least, Will truly does not have anything to give but his money. He’s just an angry guy in a chair.

And his tissue-thin character isn’t even the worst. Lou is played over-exuberantly by Emilia Clarke in such a way that I just wanted to hold her down, knee on neck, and wax those damn eyebrows off. I usually love a big juicy eyebrow but watching hers jump all over her face like not one but two hungry caterpillars were performing a pixi-stix-fuelled ballet made me want to lob a bug bomb at the screen and call it a night. Her tone was completely wrong for the film and as much as Will was a grump unworthy of love, I think she’d be even less of an attractive mate, particularly to someone who can’t get away. Luckily, if you begin to feel queasy about the whole Cinderella\sugar daddy in a wheel chair “plot”, you can distract yourself with the many swelling ballads obnoxiously shoved into the movie willy-nilly. Worst movie music ever? You decide, but I will say this: this is a two-Ed-Sheeran-songs kind of movie. That’s probably enough said.

So now we can get to the meat: the disabled community HATES this movie. Will wants to die because life as he knew it is over, and they feel like that’s a pretty horrible attitude to 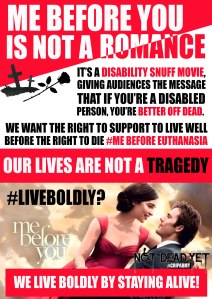 project onto the world, and they’re not wrong. Is this a disability snuff film? Disabled lives are worth living, and many are living well. However, living with a disability and living with pain are not the same. I live with both, and am extremely glad that I live in a place where I have the “right” to die. It’s not in my immediate plans, but some days just knowing I have that option is all that gets me out of bed. When the pain is bad, I know that I can end my suffering when I choose, and that gives me strength. If you think love conquers all, then you’ve never walked a mile in my shoes. Pain conquers all. Pain is bigger than the whole world.

Disabled people are people: they should be respected and portrayed fairly in TV and film as part of our diverse world. And it’s a really sad commentary when the only time they’re included in the conversation is when they’re being presented like this, the object of an impossible romance and too big a burden to live. But the right to die is about dignity. Whether Will (or anyone) decides euthanasia is the right thing for them or not, it’s a deeply personal decision, and maybe it’s time the rest of us stop judging.

18 thoughts on “Me Before You(thanasia)”