Did my grandfather write this script, by any chance? The puns scream yes. If someone pulls a Werther’s Original caramel candy out of their pocket, it’s official.

I can see glimmers of goodness in this beleaguered movie, believe it or not. Johnny Depp looks cool, even if he’s playing the same basic cartoon character he whips out for every 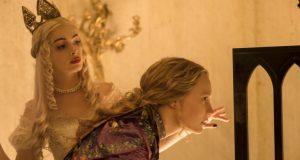 movie he’s made this century. And the queens (Helena Bonham-Carter and Anne Hathaway) are resplendently rendered. Somebody spent a lot of money but didn’t care that the story was just too convoluted for its own good. What was this even about? It’s certainly not from any story book I remember. And if you a) hire Bort and b) put him in tights, I have to believe you never intended for me to take this seriously. Not for one minute.

I saw a play of the same name in Stratford (Ontario, known for its Shakespearean efforts but this one was “off-Shakespeare” if that makes sense) starring a young Sarah Polley. And maybe that’s part of my problem: Alice, to me, will always be a little girl. Mia Whatsername is a wonderful actress but not Alice.

I was wholly uninspired by the movie and to be honest, often confused. I did catch one interesting part, where Alice wakes up chained to a bed in an insane asylum. Now, to be 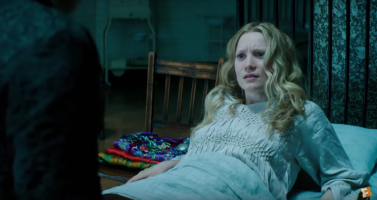 sure, a grown woman claiming to know of an alternate universe behind a mirror where she talks to rabbits and time is enough to get her legitimately diagnosed. Her doctor, however, through out the popular female catch-all “hysteria” and it reminded me of a list I’d recently seen of actual reasons why women just like me and you were committed to asylums not so very long ago. Play along, will you, give yourself a point for every “offense” you’ve committed on this list, and leave your score in the comments (if you dare).

-kicked in the head by a horse

-exposure (to other crazy people? or to women?)

Not to alarm anyone, but I’m suffering from at least 7 of these “symptoms” right now. How about you?

26 thoughts on “Alice Through The Looking Glass”