A hot mess. That’s what it is.

Margot Robbie as Harley Quinn is just about the only reason to watch this thing, and honestly, I’d like to break up with the rest of the movie and do the post-break-up thing where I cut the rest of the cast out of all the pictures and just make a glorious 18 minute movie out of just the Robbie footage. I’d be happier with that. Not super happy. I still thought the Quinn character was too loosely drawn and scantly introduced. Like, I totally buy that a patient could brainwash her into being evil. But there is no amount of

brainwashing on the planet that could induce me to speak with a Jersey accent randomly. Or to replace my PhD-level vocabulary with baby talk. That shit is bananas.

I don’t know much about this Suicide Squad outside of what the movie told me, and what the movie told me was downright confusing. Supposedly they’re super-villains, mostly sprung from tremendous prison sentences. Yet assembled they’re pretty…meek. And reserved. And obedient. I thought we’d get to see them just going apeshit in Gotham, unleashing all kinds of gleeful hell, but instead they thoughtfully fight a super bland villain that I felt mislead about in the marketing campaign.

The only thing I really connected to in the movie was the music. I assume that the money they saved on Tom Hardy backing out was funneled directly to the music budget. We don’t know for sure why Hardy left – some say for reshoots for The Revenant, some say he just didn’t like the script (although I expect most of the big stars signed on without seeing a script). I think he was supposed to be the most vanilla cracker out there, Rick Flag, and I can’t imagine him being happy with that crummy role. While I appreciated the music (great big pop anthems that helped perk me back up – my patience and attention floundered considerably, and often), I can also see how it was a cop out. First off: you aren’t Guardians of the Galaxy. Music had a purpose and is part of the universe. In Suicide Squad it just felt they were using music to distract us from the fact that they didn’t know how else to finish a scene. Or begin the next one.

Being part of the Suicide Squad must be a lot like being part of Taylor Swift’s squad. I mean, can you name anyone in it besides Taylor Swift? Harley Quinn is obviously the Taylor Swift here, and Will Smith is The Duff (designated ugly fat friend) – he’s nice to 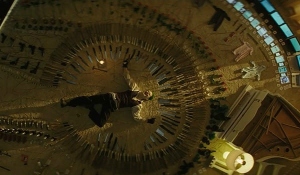 have around mostly just to prop her up. Smith didn’t annoy me as much as I feared (this movie has so many bigger problems), but Robbie is the true star. She plays Quinn not with a truly villainous heart, but with a completely troubled one – with loads of vulnerability. When the witch tempts her with a vision, her true heart’s desire is revealed to be…a banal suburban existence, completely with a husband and an infant. Clearly the good Doctor is still buried within her, and is peaking through. Or maybe it’s the baby in her belly poking mama in utero. Because she must be pregnant, right? Why else would the Joker so doggedly rescue her? He’s not exactly the kind of guy who’s all about love, honour, and commitment. But what if she’s his baby mama? Why else would he be seen lying in a womb made out of knives, skirted with baby clothes? It must have been some bad-guy baby shower!

Speaking of the Joker…what the fuck? I’m not in love with Jared Leto’s portrayal, and I’m not certain about David Ayer’s intention. Who is this Joker? Chris Nolan’s Joker was so demented there’s no way he could be in a relationship. You cannot picture Heath Ledger’s Joker having a Netflix and chill night with his girlfriend. So this Joker’s…I’m not sure. Down to earth just seems wrong. But he’s not as twisted. He’s more human, in a hipster’s

ironic conception of a Latino gangster-cum-circus clown hybrid kind of way. We didn’t see much of him so it’s hard to tell, but he also didn’t seem as evilly inventive as I’ve come to expect in a Joker. So he’s possessive and he’s got some hacker friends. Big deal. I’m sorry that so many of Leto’s scenes ended up on the cutting room floor because I found him to be the second most compelling character in the bunch, and he’s not even on the squad! He’s the Calvin Harris of the bunch. Or the Tom Hiddleston, I suppose, just trying to steal Taylor Swift away all for himself. Fuck the squad.

And let’s be honest: this movie couldn’t handle the squad. It didn’t know what to do with them. The introductions were wildly variable, and, spoiler alert: the character who noticeably didn’t get one DIES. Yeah, that’s right, Ayer. Your shit is weak. You clearly couldn’t cook up a fun and deliciously depraved story for these fuckers so you gave us this watered down jumble instead. You should have saved it for someone who had the cojones. I think a satisfactory Joker-Quinn story could have been told here instead. DC jumped the gun with Suicide Squad – too many unknown characters, too little for them to do, too little story to make us care. But watching ‘Mister J’ change diapers for little Joker Junior in Arkham? Now that I’d be down for.

Check out more Suicide Squad discussion on our podcast: