While I don’t always admire Adam Sandler movies, I do admire his work ethic. Every movie is just an opportunity for him to take another glamourous vacation with his family and friends, and call it a tax write-off. He seems to have a soft spot for Hawaii, and who can blame him?

Just Go With It was worth another trip to the islands – Maui, to be specific. Well, the movie is deliberately vague, because sometimes they’ll start out on the island of Maui and then magically end up in Kauai: the magic of Hollywood, folks!

The title pleads for you to “just go with it” and you’ll have to in order to enjoy this thing even a modicum. It’s a sad little premise, in that Adam Sandler is a player who wears a fake wedding ring in order to pick up empathetic dates who he never has to commit to.  Until he meets his dream girl, played by bikini  model Brooklyn Decker, and now he has to orchestrate a fake divorce in order to be available to her. He blackmails  his assistant (Jennifer Aniston) into posing as his soon to be ex-wife, and her son cleverly milks it for a trip to Hawaii.

After some allusions to Pretty Woman, the movie is pretty much just a tropical setting and some classic Sandler shenanigans. Jennifer Aniston is a stand-out: 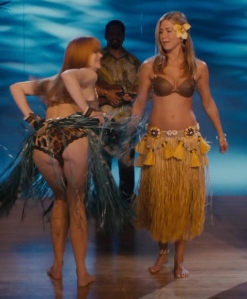 she really makes you remember what fine comedic timing she has. So while this in no way is a good movie, it’s kind of enjoyable if you squint hard enough. Actually, my favourite part is when Aniston and her college arch-nemesis played by Nicole Kidman do a hula-off. You could watch that scene, have a laugh, and not feel too bad about yourself.

Jennifer and Adam were friends for more than 20 years before they got around to making a movie together. They met before either was famous, and she’d go watch him do his stand-up before sharing a cheap meal. Now they’ve each had their mega-success, so why not take their respective crews to the most beautiful place on earth? Nicole Kidman maintains that she loved the experience of making this film no matter what the critics said. Her kids and even her parents were with her. Adam’s wife and kids appear in the movie, and so does Brooklyn’s hubby. Who wouldn’t want to work from Hawaii? This week, though, I’m not working. In fact, right about now I should be hiking up a volcano on Maui. Aloha!

9 thoughts on “Just Go With It”