Jack Reacher: Never Go Back is not enjoyable.  It feels old and tired, a cliché of a cliché.  The only fun I had whi 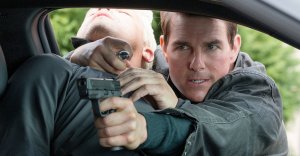 le watching was making fun of all the things that Tom Cruise’s character could never go back to (and there’s a lot because he’s essentially a hobo who seems to piss off everyone he interacts with).

Basically, Jack Reacher: Never Go Back is the most generic Tom Cruise action film you can imagine.  He runs really fast as always, though here a woman keeps pace with him somehow so she must have had superpowers.  Despite not winning the race, Cruise’s character redeems himself by being smarter than everyone, persisting in the face of slight facial injuries that show us he’s up against impossible odds, and drawing on the legal skills he learned during A

Few Good Men to avoid incriminating himself in one particularly Tom-Cruise-y scene (as you may have deduced, while watching this film I decided to treat Tom Cruise’s filmography as if he has literally been playing the same character this whole time, because figuratively he has been doing exactly that for the last 35 years).

I skipped the first Jack Reacher and Jack Reacher: Never Go Back made me really glad I did.  If only I had been smart enough to skip this one.  If you’re a fan of Mission: Impossible then you may get some minor enjoyment out of this one, but it’s a pale imitation (incidentally, when I saw the trailer I thought it was a new M:I movie so that’s an indication of how generic this movie really is).  Also, if you’ve seen the trailer you have already seen what might be Cruise’s best sequence in the movie.  Basically, there’s no need to buy this cow especially when the free milk being given away isn’t even fresh.

Jack Reacher: Never Go Back gets a score of 4 unhandleable truths out of ten, because a film this mediocre and generic does not deserve any original wordplay.