Writer-director Brett Haley made a great little film called I’ll See You In My Dreams. It starred Blythe Danner as a woman coming to terms with widowhood and a new chapter in her still full life. It was a surprisingly mature film from a young film maker, and it has spawned another one. In I’ll See You In My Dreams, Haley cast Sam Elliott as a love interest for Danner, but it was Haley who fell in love. He so enjoyed the experience of working with Sam and his enchanting mustache that he wrote a movie just for him. That movie is called The Hero.

Sam Elliott plays an actor, a guy who used to be a big western star, back when westerns 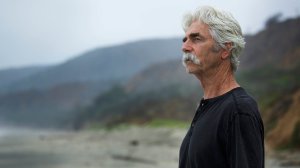 were big. Nowadays he’s lucky to get work schilling BBQ sauce. Bad news about his health forces him to put his life into perspective. So does receiving a ‘lifetime achievement’ award at a time when his lifetime is feeling quite finite. He has a tangled relationship with his daughter (Krysten Ritter) and a complicated, budding relationship with a woman roughly his daughter’s age (Laura Prepon). Just about the only person he can talk to is a former costar\current drug dealer (Nick Offerman) who has a pretty relaxed attitude about everything.

The Hero has a languid pace, reminiscent of Sam Elliott himself. The film is introspective, beautifully shot, contemplative, fulsome. This was a must-watch for me because of a playful, giggly Nick Offerman, and he doesn’t disappoint, but he’s a secondary character, as everyone is, to macho Lee Hayden, cowboy in his golden years, not quite ready to ride off into that sunset.

The good news is this is not just another weepy cancer drama. Despite some flaws and heavy-handedness, if you keep your focus on where the film intends, that is, on Sam himself, you won’t be disappointed. This role is Elliott adulation. It gives him the time and space to savour the spotlight all by himself, to feel its warmth, to get applause. His performance earns it and warrants it all the way. Lee Hayden is not a hero, he only played one in the movies. In his personal life he’s a bit of a failure, but he does get one hero thing right: it’s never too late.