Little E.B. is training to be the next Easter Bunny in a Santa’s-workshop-like facility where fluffy little chicks make all the candy.

Meanwhile, in the live-action realm of the film, Fred (James Marsden) is undergoing an intervention at the family dinner table. His parents (Elizabeth Perkins, Gary Cole) want him to stop dreaming, get a job, and move out of the house.

Back in cartoon land, E.B. (Russell Brand) is about to be crowned Easter Bunny now that 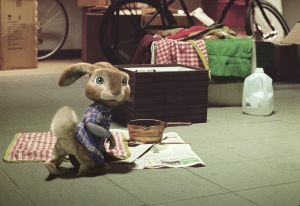 he’s a teenager, but he’s more interested in drumming and rock and roll. His dad cracks down hard on his “selfish” son; there are 4000 years of tradition to consider, after all. But E.B. has a mind of his own and he takes off for Hollywood, where dreams come true. Except for Fred’s. His are over, especially now that his parents are kicking him out. But Fred and E.B. are united when Fred hits E.B. with his car, and then takes him in to make up for it.

Back on Easter Island, E.B.’s dad isn’t taking to being openly defied very graciously, and he unleashes the “Pink Berets” on a rescue mission to find and bring back his irresponsible son. Carlos (Hank Azaria), a particularly ambitious chick, is trying to throw his own hat into the ring. I mean, is it absolutely imperative that the Easter Bunny be a bunny?

Turns out, befriending a talking cartoon bunny isn’t great for Fred’s mental stability. To help get E.B. on his way all the quicker, he agrees to get him to the big audition that David Hasselhoff is apparently hosting. Will Hollywood find a place for a cute little bunny with a sick beat? And what will happen to slacker Fred? Find out the riveting answer to these questions and more in the Easter-themed half-animated movie, Hop. It is not remotely good but I bet it’ll be a big hit with kids this time of year.