There was nothing very honourable about the war in Iraq, and this movie knows it. It’s written by war vet Chris Roessner and he’s not afraid to paint the screen with his shame.

Private Matt Ocre (Nicholas Hoult) signed up to the reserves in the summer of 2001, thinking it would help him pay his way through college. And it might have worked had some idiots not flown planes into the Twin Towers. So off he goes to a war that’s immediately disillusioning. He doesn’t know why he’s there or what he’s doing. 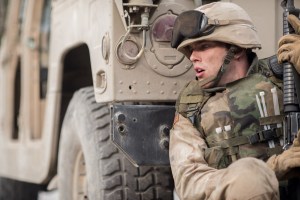 Roessner watched Platoon for the first time in Saddam Hussein’s commandeered palace in Tikrit and it made him want to really pay attention to what was happening around him – it was film school he was hoping to attend, after all. Now he’s among the first of his generation to write a script about his own war.

If Ocre is a reluctant soldier, he’s also an empathetic one. Younger than most others in his platoon, he isn’t yet jaded; his naivety both a blessing and a curse in his work. He gets sent to a village where they need to repair a water main but work is slow, the days scorching, the villagers too afraid to lend a hand. It’s a clusterfuck. The movie is basically the whole war in a nutshell: it doesn’t go very well. They fight apathy every day. The two sides struggle to understand each other.

Sand Castle diverges from other recent war movies in that it shows fresh-faced new recruits being sent overseas, maybe for the first time in their lives, instead of the grizzled, cynical Bradley Cooper types we’re used to seeing.  The movie is authentic but it’s no classic – a forgettable, minor war movie. But it does give Henry Cavill the chance to shout my favourite line: “Listen here you piece of shit. I hope you get shot and fucking die…Don’t translate that.”