If you love true crime, you need to stop what you’re doing right now and run, don’t walk, run to your nearest Netflix portal.

Abducted In Plain Sight is about a pedophile who cozied up to a nice suburban family in order to have access to their young daughter, Jan. Lots of pedophiles know that you catch more flies with honey, and this guy was the whole damn hive. Apparently charming as hell, the “fun dad” from across the street, “B” would do 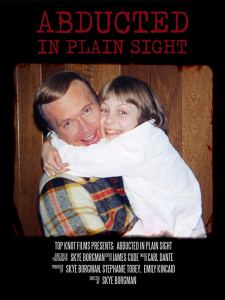 anything to get close to Jan, and Jan’s parents were naive and trusting and just plain dumb. I mean, dumb enough that they BOTH had their own sexual relationships with this man when all the while all he cared about was screwing their kid. Which they basically invited to happen as they allowed him to sleep beside her in her bed because he asked nicely.

He kidnaps her eventually, and I’m not sure why since he had such cushy, unfettered access to her even in her own home, but he clearly had this elaborate hoax ready and was intent on seeing in through. He gets aliens in on the scheme, and a winnebago in Mexico. It’s pretty sordid stuff. But eventually Jan is returned home, months later, and apparently married to this guy even though she’s all of 12, and the parents drop all charges. But they don’t understand how brain-washed Jan is, and how motivated B is to continue their relationship. It just goes on and on and on. I guarantee you you’ll scream at your TV. How could any parent be this stupid, this cavalier with their daughter’s body, her well-being?

This film is bananas. You can’t and don’t want to believe it’s true, and yet here is Jan, all grown up, very neatly and intelligently laying the story out for us. And even more amazing than her survival is her forgiveness of her parents who failed her on pretty much every level a parent can, and then when they ran out of ways to fuck her over, they went ahead and invented some more for good measure.  And the film goes out of its way to assure us that THESE ARE GOOD PEOPLE. Sure they are. But…but what the hell? How could this happen? Honestly, this story is so crazy you’ll need to hear it from Jan’s own lips to believe it, and then you’ll need to scrub your brains out with soap just to go on with your life because seriously dudes, WHAT THE HELL? You could make a legit drinking game out of just seeing how many times you mumble WHAT THE FUCK while watching this thing. It’s only 90 minutes long BUT YOU WILL DIE OF ALCOHOL POISONING FOR SURE.

I CAN’T EVEN with this review. It’s been a few days but I’m still reeling, and still really wanting to subject as many people as I can to this, because I shouldn’t have to experience this haunting on my own.

25 thoughts on “Abducted in Plain Sight”