Richard Dunn (Jeff Daniels) is a failed writer, and perhaps just a failure, period. His successful surgeon wife Claire (Lisa Kudrow) has rented him a little writerly cottage in Long Island and gifted him a laptop as well as the time and space needed to get to work on his second novel. Despite that sounding like absolute pure heaven to most of us, Richard doesn’t manage a shred of gratitude. Instead he wonders if this is in fact a trial separation in sheep’s clothing.

So I guess that’s why he doesn’t feel particularly guilty when he spends this time not at his desk but getting to know a teenage girl named Abby (Emma Stone). Abby is a lonely, solitary sort of person, despite the fact that she has a devoted friend and a bad boyfriend. She and Richard are practically kindred spirits, which they discover when he repeatedly hires her as a babysitter despite the fact that he has no kids. Yes, it plays as creepy as it sounds. And yet a friendship blooms in this unlikely, inhospitable place.

Despite Richard’s middle age, he is a child. He is petulant. Self-indulgent, he sees only 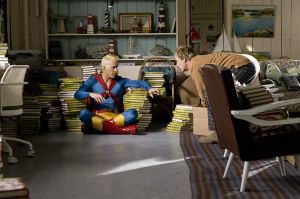 his own need and sorrow. This is further indulged by his imaginary friend, Captain Excellent (Ryan Reynolds, before he played Deadpool or even Green Lantern), a super hero type in cape and tights who tells him what he wants to hear.

You can imagine what it might be like to be married to a Richard. This is a coming of age tale for a man who is way too old to need one. A late bloomer or just too pathetic for words? Richard straddles that line, uncomfortably. But he’s reaching out, so not all hope is lost. He’s perhaps reaching out to the wrong person, to an inappropriate person. How is this relationship likely to be interpreted – by his wife, or her parents, for example? And yet this is what it is to be human. It’s all about the connection. Richard and Abby can truly be themselves around each other in ways that they haven’t achieved anywhere else.

Jeff Daniels continues to be good in dark roles. Emma Stone is vulnerable and feverish. They’re a couple of wounded characters and they ooze their indie drama. There’s a danger of drowning in all the mutual wallowing. For all its quirk, Paper Man might be lumped into those “man-child-struggling-to-grow-up” films (coming of middle age?), but it is saved by some very compelling performances.