Oh man, being sick was great when I was a kid. So great. You got to spend the day at Nanny’s house. Nanny had rich people’s margarine, which tasted 60% like butter and only 40% like chemicals. She was generous with it, which made her baloney sandwiches taste extra good. Of course, the thick-cut baloney didn’t hurt either. Heaven! You mostly got to lounge on the couch, being served, and watching TV. Nanny was devoted to her “stories” (her special nickname for soap operas) but before they started, there was The Price Is Right.

Perfect Bid is about a man who was not content to simply enjoy a game show from his grandmother’s couch on the occasional sick day. Ted watches A LOT. And he starts to 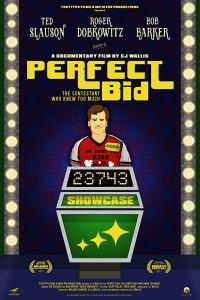 notice patterns. So he makes elaborate spreadsheets, enumerating prizes, and prices. And now there’s only one thing left to do: obsessively attend tapings until he gets picked. Ted is NOT local, so he spends years taking trips down to L.A. and by the end, people won’t even come with him anymore. It takes 24 shows before he finally gets picked, and up he goes to make his bids, and if memory serves, he’ll get them right. Down to the last dollar. But even the best memory can’t account for the component of the show that’s just plain luck, so Teddy boy doesn’t make it up to the Showcase Showdown. And wouldn’t you know it: The Price Is Right has a pesky rule that says once you’ve been chosen once, you don’t get chosen again.

Oh you know I love me some documentaries about life’s weirdos. And the world is so full of weirdos they’re literally falling off. Ted is kind of a weirdo. And the director, C.J. Wallis, plays that to the max, practically casting him as some sort of not-so-evil mastermind.

Meanwhile, there’s a secondary kind of wonderfulness woven through the documentary like a ribbon, and his name is Bob Barker. It some ways, Perfect Bid is a tribute to Barker’s 35 year history with the show, always a perfect gentleman and a flawless host. There may be such a thing as a too-perfect contestant, but as a host, Bob’s perfection knew no bounds.

8 thoughts on “Perfect Bid: The Contestant Who Knew Too Much”