Emma is 21, handsome, clever, and rich. She is her father’s last unmarried daughter and she fancies herself a successful matchmaker. It is the thing upon which she prides herself the most (and there is quite a bit of pride), but though she seeks the best matches for her nearest and dearest, she has no interest in or plans to marry herself.

Emma (Anya Taylor-Joy) currently has her sights set on  her good friend Harriet (Mia Goth), a young woman of questionable parentage and no wealth. Though Harriet already has a romantic interest in a farmer of little means, Emma persuades her to reject his advances in favour of a better (read: richer) match, Vicar Elton (Josh O’Connor).

Of course, Emma’s meddling could never be as straight-forward as that. George (Johnny Flynn) accuses her of vanity, her father (Bill Nighy) implores her loyalty, Miss Bates (Miranda Hart) pesters her continually, Jane (Amber Anderson) seems to best her at everything, and the sudden appearance of handsome, mysterious Frank (Callum Turner) has everyone in a twitter.

First, let me say I am fully on team Alexandra Byrne for costume design this year. The dresses, the jackets, the trousers, the hats – they all share a romantic, period feel, but they’re all elevated, better than real life, and believe me, if I thought for a second Byrne could live comfortably in my closet, I’d kidnap and hold her there in a heartbeat (note to Byrne, should she read this: please don’t take that as a threat, though it does share the same qualities as a certain felony – I am merely a great admirer with a tendency to over-dress).

Second, Bill Nighy. I mean: Bill Nighy. He lights up every scene he’s in, he snatches giggles like they’re his life force, he’s an absolute treasure and I simply could not get enough.

And of course, the script. I love how Eleanor Catton has adapted it from the Austen. Altough it is hard to improve upon a classic, Catton’s Emma. is a lot of fun (sorry if that’s confusing, the one-word title has a period at the end, apparently emphasizing that this is a “period piece”). Emma is young, obviously, and quite sheltered in her father’s home. In her naivete she reinforces a classist and of course sexist social construct and can’t see the error of her ways until it’s reversed. Austen’s comedy works because there’s quite a lot of tension, quite a few misunderstandings, and some very complicated love triangles. 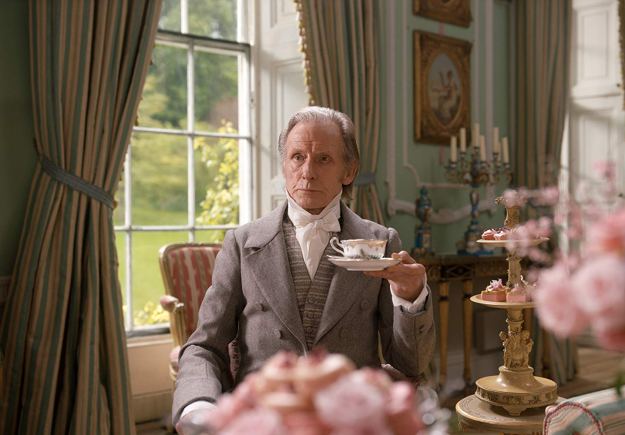 Anya Taylor-Joy is up to the task, though I couldn’t help wondering what it might have been had Florence Pugh stepped into the role. Besides Nighy, which is a given, the performances I enjoyed best were from supporting players Miranda Hart and Tanya Reynolds, who add a lot of life to film.

But even with the sumptuous gowns and the glittering brooches and the tasseled coaches, I wouldn’t want to live in this period where a woman’s only achievement is in marrying “above her station,” dead birds are offered by way of apology, and a twisted ankle is considered top-tier flirting.

In response to the closure of cinemas due to the COVID-19 corona virus, Emma. has been given a VOD release. You can rent the film for $20, which may sound hefty for a rental, but it’s less than you would pay to see it in theatres, and while this is still early days of terms of quarantine and chill, even Netflix’s deepest back-catalogue will exhaust itself at some point. And Emma. is a pretty great way to fill that void.