Do you like A Christmas Story? Well may I present to you its bastard brother, The Christmas Project. It’s a blatant ripoff, and a very embarrassing one. Almost identical, but vastly inferior.

It’s a “period piece”, but while A Christmas Story drips with nostalgia, this is just an excuse to have mom in teased hair and blue eye shadow. Even the Christmas Story-esque narration can’t make a good case for itself.

There’s a bully. There are broken glasses. There’s a snafu with the turkey. There’s a definitive homework assignment. There are dreaded Christmas gifts from a clueless 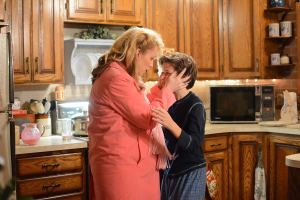 aunt. How this movie did not result in a plagiarism lawsuit is beyond me. But as you know, in my books, the worst offense is to bore me. And this one bored me impressively, from tail to antler (that’s a new saying I just made up, in honour of the holidays). With nothing new or original or well-said, there’s literally nowhere to direct your attention to in this film. It’s the kind of movie where, as the credits roll, you’ve unexpectedly baked a pie or given yourself a manicure. Your brain just gets so thirsty for input, anything will do. You might compulsively online shop, or you might accidentally eat the whole bag of chips. And it’s not your fault! Santa will be leaving big lumps of coal in the director’s and writer’s and producer’s (etc) stockings this year; the movie is from 2016 originally but it only offended me this year, so another round of coal is due, on my behalf (and hopefully not yours).

I’m not even sure that coal is enough. I’m sharpening up candy canes – a shiv with a minty aftertaste. And I’m crushing up glass ornaments. And I’m going to leave little Elf on the Shelfs all over their homes in random places; not the joyful elf in regular houses, but elves whose eyebrows I’ve made dark and pointy, so when the person happens upon it, perhaps in some dark, out of the way corner, they’ll be startled, and then feel judged. And those little wooden eyes will bore into their souls, causing them to question their motivations and goals with the only possible outcome to realize that they’ve lived their lives entirely wrong. Merry Christmas everyone!

2 thoughts on “The Christmas Project”