Under the Skin is described as a science-fiction-horror-art film. I hardly know how to talk about Scarlett Johansson as this alien seductress but what I can’t help talking about is the thing that’s still haunting me three days later: the score.

It was composed by the brilliant Mica Levi (and produced by Peter Raeburn, who recommended her to director Jonathan Glazer). Mica primarily used the viola to write and record the music, deliberately seeking out the most “identifiably human” sounds the instrument could make. She 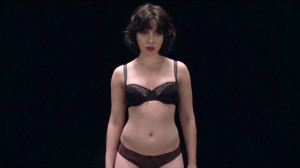 then altered the pitch and sometimes the tempo of these sounds to “make it feel uncomfortable” which she accomplished with crazy amounts of success, I tell you what. It made me monumentally, UNCOUNTABLY uncomfortable.

Glazer had her writing music to express Johansson’s feelings as her character experiences things for the first time, with the music following and reflecting her in real time, so to speak – “What does it sound like to be on fire?” he asked of her, and oddly, she had an answer. Another scene where the alien Scarlett attempts to eat cake is a stand-out for me, but is actually accompanied solely be the normal clatter of a popular family diner. The stark absence of scoring is as jarring as the creepy, otherworldly music can be.

The greasy, sinister sound of the viola is accompanied by percussion whenever a new man (victim?) follows Scarlett into the abyss. This music is unrelenting and aggressive, and it repeats with each new conquest. In an article for The Guardian, Levi wrote: “Some parts are intended to 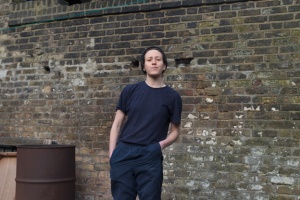 be quite difficult. If your life force is being distilled by an alien, it’s not necessarily going to sound very nice. It’s supposed to be physical, alarming, hot.” Well, I’ll give her alarming. And unnerving. The sound is experimental, but at times she can get a whole orchestra in on it and it gives you the shivers.

Pitchfork wrote that “the strings sometimes resemble nails going down a universe-sized chalkboard, screaming with a Legeti-like sense of horror.” There’s nothing hummable or toe-tappable in this soundtrack, but it’s filled with innovative sounds that your body reacts to on a visceral, immediate level, leaving your mind racing to catch up.

I still can’t get those strings out of my head. They contribute to an audio-visual experience that’s unequal parts tension, perversion, anticipation, anxiety, and a big ole dose of the willies. The willies! Oh man, tonally and aesthetically this movie is disturbing. I’m disturbed, guys. There’s no going back.

31 thoughts on “Under the Skin (is Under Mine)”