Wandering Through the Shelves’ caveat at the end made this a tricky one. There are so many G-rated animated films taht I adore. I really had to dig deep for liv action family movies for me to endorse, especially since I already used up Babe in Live Action Fairy Tale Adaptations.

Home Alone (1990)- It makes it easier when the movie for kids came out when I was a kid. All I needed to do when rewatching it for the first time in twenty years was remember what it was like to be a ten year-old ewatching this for the first time. When I was a kid, I watched it for the sadistic finale. As an adult, I love Catherine O’Hara’s quest to get home to her son and got a kick out of how resourceful Kevin becomes. The casting is perfect from Pesci and Stern to Hope Davis as a French ticket agent. 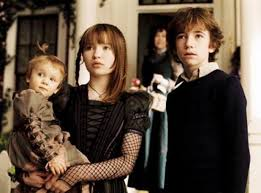 Lemony Snicket’s A Series of Unfortunate Events (2004)– If my calculations are correct, this may be the last time that the once great Jim Carrey was actually fun to watch. His homicidal master of disguise dominated the previews but the three kids- an inventor, a reader, and a biter- are the real stars. When all the adults are either despicable or clueless, these three take care of each other without ever having to set traps. Although not nearly as dark and unfortunate as Jude Law’s narrator keeps warning us (the parents die in every movie, bud. This isn’t that unusual), SOUE has a wicked sense of humour and genuinely touching moments.

Hugo (2011)- Does this really count as a kids movie? One of Scorsese’s better post-Goodfellas films, Hugo is pure magic for any age. The scenes in the train station- where people get on and off trains and work in various shops-were especially spectacular in IMAX 3D and scorsese’s love of movies has never been more apparent. Not sure I can picture Hugo as the next Spiderman though.