The Barden Bellas from the first 2 movies are back, but they’ve been replaced. Having finally graduated from college, a new crop of girls is singing acapella at their alma matter and the old Bellas are feeling obsolete. Shitty jobs aren’t panning out and dreams are already broken, and the old Bellas are feeling obsolete (I know! Who would have guessed that majoring in mouth music wasn’t really the best life choice?!). A last ditch effort to reunite comes in an invitation to perform for the troops in a USO show and since the Bellas have literally nothing else going on (except for one unwanted pregnancy), off they go to a warn-torn Spanish resort hotel to do their part.

Now you might think that being in a war zone is the toughest part of this new chapter, but in fact, to the Bellas, because they’re not crazy AT ALL, the worst part is 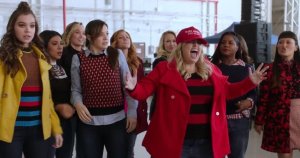 competing against bands that play instruments. How dare they! I thought college was supposed to prepare you for the real world but these ladies are literally not even prepared for guitars. Yeesh. (Not to give too much credit to the new “bands”, including Evermoist, led by Ruby Rose, because after seriously mocking the Bellas for being a “cover band”, it turns out they all do covers too! A Cranberries tribute is particularly poignant with the recent death of Dolores O’Riordan.)

Anyway. There was absolutely no call to make a third movie here, and the script strains so hard to justify itself you’ll want to buy it a squatty potty. If you absolutely must watch it, you’ll want to wait until it’s available at home, where you can fast-forward to all the Sia bits and avoid the inane “plot” (though you’ll want to hear John Lithgow sing with an Australian accent at least once, just to say you did). It’s pretty clear that this franchise needs to learn the same lesson the Bellas do: moving on is good.