Ben is back. Believe the title. It’s Christmas Eve and Holly (Julia Roberts) has been out and about with her kids, running last-minute holiday preparations. But when she pulls in to her driveway, her eyes light up. Her Christmas wish has come true: eldest son Ben (Lucas Hedges) is back. He’s been away at rehab, and so has a piece of her heart. What a wonderful thing to have him back, to have her precious family all together for the holiday. But her happiness is tempered. It’s obvious without her saying so that she doesn’t quite trust him, that he’s given her lots of reasons not to. 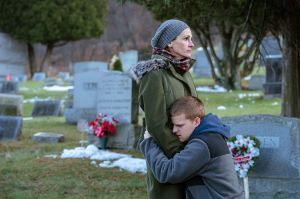 Her teenage daughter is skeptical, but her husband Neal (Courtney B. Vance) is downright wary. Not only has he also put up with Ben’s ups and downs, he’s been the one putting his family back together afterward. But with Ben’s sponsor’s blessing, they come up with some boundaries and agree that Ben can stay for 24 hours of holiday magic and memories.

Well, there will be memories. Just not the cozy ones Holly was hoping for. This is what addictions are really about. About how they make a whole family sick. About the lies and the broken promises. But it’s also about a mother and her boundless love. About how she is afraid to enable him and afraid not to. Afraid of the danger and the toll and the consequences, but mostly afraid to lose him – lose him to drugs, lose him by pushing him away. So she jumps off the cliff alongside him. So now, instead of a sweet Christmas reunion, we’ve got a sketchy, seedy, underground drug movie. Holly’s concerned family at home remind us what the consequences are.

There were lots of movies about addiction at TIFF this year. Beautiful Boy was similar in theme – it too is told more from the parent’s perspective but its content is totally different. Steve Carell stays at home and frets for his son’s safety – the horror is in not knowing whether he’s alive or dead, in anticipating that phone call. For Julia Roberts, the horror is watching it all happen, finally understanding the extent of her son’s problems but still feeling just as helpless. Roberts is fucking fantastic in the role. Ben Is Back is heart breaking and intense. It is further proof that we still don’t know the best way to help an addict, and lord have mercy on any parent who has to learn that first hand.