Something has to bear the banner of “bloodiest thing I saw at TIFF” and I’d wager that Brimstone bears it proudly, has indeed gone to great lengths to earn it. 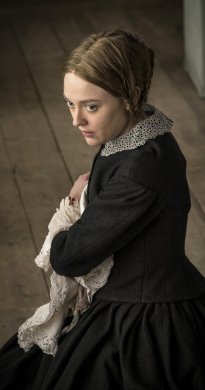 Dakota Fanning plays a mute woman newly married, raising a dead woman’s son and  a daughter of her own. She is unable to speak but the look of dread on her face when she hears the new preacher’s voice tells us all we need to know. That preacher (Guy Pearce) has been stalking her for years, and bathing villages in blood as he attempts to make her his.

Their story unravels backwards – chapter one sets the above scene; chapter two rewinds to her childhood in a religious-pioneer settlement when her mother was the object of his cruel “affections”; chapter three follows her to a saloon where she does what she must in order to escape; chapter four has him caught up to her, and to her kids, as she flees through snowy, barren land.

Guy Pearce is diabolical – the extent of his character’s actual super-naturalness is unclear, or up for debate, but he’s a twisted zealot AT BEST and I’ll let you decide if there’s more to it. Dakota Fanning as Liz is necessarily quiet but full of strength and grit. He comes at her hard with vengeance but she’s a surprisingly formidable opponent. 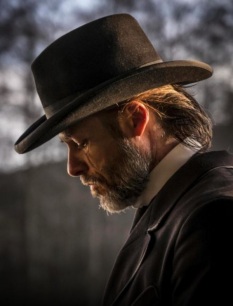 suppose, but I’ve never worn my intestines as a scarf. Have you?

The images are powerful, and will burrow under your skin. And there are 148 bloody minutes of them. It’s not all gore though, there’s plenty of foreboding, plenty of tension. The setting does a lot to add to it: isolation is nobody’s friend. The land is unforgiving.

The MPAA warns of brutal bloody violence, strong sexual content including disturbing behavior, graphic nudity, and language. That doesn’t really tell a story though, does it? And it certainly doesn’t account for how thoroughly you’ll scour yourself in the shower after watching it. There’s no label for that. Except maybe “A film by Martin Koolhoven.”