Amazon tempted me into this one with the promise of some pretty funny dudes: Keegan-Michael Key, and the Sklar Brothers, who I didn’t even know acted. Turns out, they don’t. But they do do their stand-up act in front of a camera in “character” as a couple of funny brothers. Actually they play high school counselors – their job is to help kids get into college and they are spectacularly bad at it. Keegan-Michael Key 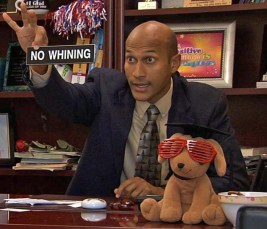 plays the principal and he’s pretty darn at that too. But Matt Letscher plays the titular “Teacher of the Year” and though his character has the bonafide ribbon, you kind of have to take their word for it that he’s good at his job. Although we see quite a lot of him in the classroom, he rarely seems to be more than competent, and sometimes quite a bit less. Even so, this Teacher of the Year is being lured out of teacher. And if this is the best they have, they cannot afford to lose him. The rest of the school seems to be populated by teachers who are either oblivious or crazy with jealousy. It’s a sad state of affairs.

Anyway, as I should have guessed from a movie that’s hired stand-up comedians rather than actors, it’s hella-funny in some very small, contained parts, and mostly not at all funny in all the others. It’s sort of a mockumentary and sort of just a failed movie.

Lexi is a white South African millennial who has recently inherited a ridiculous amount of farmland in the middle of nowhere. She is fully aware that her family stole this land from some black people and she gets a little touchy whenever the subject comes up. Which it often does when she brings her three black South African millennial friends on a camping trip on her family’s land.

The four friends (3 girls and a guy) have very different histories and worldviews, but the mood is light and friendly on the first day. Things take a turn for the awkward on Day 2 though when they wake up to discover that they’ve somehow swapped bodies overnight. The fallout is brilliantly captured by director Jenna Bass on her iPhone in found footage/mockumentary format.

Whether in South Africa or even right here in Canada, 2017 is a tricky time to make a film about racial tensions. The worst thing one can do is to reinforce the myth of easy answers just to get your Hollywood ending. Bass -and her four stars who co-workers the script with her- are very careful to avoid this trap. The interaction between the characters are every bit as messy and unpredictable as they should be. It’s a little bleak, refreshingly honest, and avoids the typical lazy talking points.

As for the fantasy gimmick, it works and it doesn’t. It does provide some opportunity for some comic relief that seems to emerge organically from the situations without resorting to too many Freaky Friday clichés. It is confusing though; I did spend a lot of time trying to remind myself who was in whose body. Which is a bit of a problem. Given how much of the story lies in subtext, it becomes important who’s saying what.

That’s all fine though. I don’t mind having to work to keep up with a film this sincere and well-acted. It just seems that much of the conflict between the characters boils to the surface due to extreme stress and not always specifically because they’ve swapped bodies. So I had to wonder if this all would have been less confusing had they just ran out of gas.

High Fantasy is exactly the kind of film that most of us go to festivals for. It’s a low budget and unique film that is surprising and challenging. You’ll probably be begging your friends to watch it so you can have someone to talk about it with.

First of all, here’s what we’re dealing with…

I dare you not to hum that on the bus later.

While some of the songs may get stuck in your head though, the movie may not. It didn’t for me. I watched it less than twelve hours ago and the memory is already fading fast.

Being forgettable is Popstar’s biggest and only real problem. This is partly because it packs so many jokes and cameos into less than 90 minutes that it never slows down long enough for you to really process much of it. Luckily, the jokes land with impressive efficiency even if they don’t stick.

As if it matters, Popstar is to The Lonely Island (Andy Samberg, Akiva Schaffer, and Jorma Taccone) what This is Spinal Tap was to Spinal Tap. If you’re not familiar with The Lonely Island, the video I posted will give you a pretty good idea. Made semi-famous by their SNL Digital Shorts, they’ve been spoofing pop and R&B for nearly a decade with songs like Dick in a Box, I’m on a Boat, and I just Had Sex. This film mockuments their rise, fall, breakup, and reunion.

Taking aim at easy targets, Popstar’s satire may not be necessary but it sure is welcome. Rarely does a joke miss its mark and it’s the rare R-rated comedy that never gets stuck in an ill-advised gross or bizarre gag that it can’t seem to find its way out of. As for whether or not this will become a modern quotable classic like Anchorman or Superbad remains to be seen and the fact that I started to forget the movie almost as soon as I left the theater may not be a great sign. I have no idea how well it will hold up to a second viewing but Popstar’s first viewing will not disappoint and it DEFINITELY will not bore you.

In 2008 I came across this brilliant movie, Eagle vs Shark. It’s a special brand of dry and awkward humour that’s only really appreciated by about 0.3% of the population and so of course I started using it as a social barometer. It’s how Sean went from ‘guy I’m sleeping with’ to ‘husband’ (we 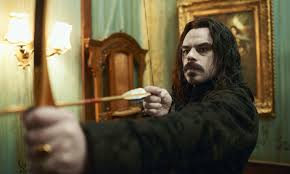 had no in-between). That’s not to say he didn’t shoot me weird looks during the movie, but he laughed in the right places and so I knew it was safe to fall in love.

Taika Waititi wrote and directed Eagle vs Shark, bringing along pal and fellow countryman Jemaine Clement (of Flight of the Conchords fame) to star, and they’re back again with What We Do in the Shadows, sharing duties and screen time. It’s not easy to get such an offbeat comedy from New Zealand shown in North American theatres (I believe crowd funding was involved) so I consider myself lucky that one lonely theatre is showing it here in Ottawa. 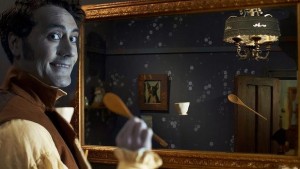 New Zealand instead. The documentary crew follows them as they encounter the normal highs and lows of flatting together, sorting out who does the dishes, who picks up the dry cleaning. A chore wheel goes unused. A couch that wasn’t red now is – one vampire suggests putting down newspapers before they eat someone, or towels, perhaps, but “We’re vampires, we don’t put down towels” responds another. Like The Real World, only they just happen to also be vampires, sometimes many hundreds of years old.

The vampire genre might be overworked and overtired these days, but this one feels fresh and 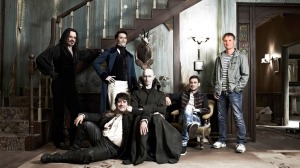 inspired, living up to the high bar set by Christopher Guest and the likes of Best in Show.  My sides ached from constant laughter, the nicest ache I know. Waititi, Clement, and co-stars work really well together. It’s clear that tonnes of improvisation must have gone into this, the dead-pan delivery spot-on, the timing the best you’ll see. It never feels like a straight parody. It’s much too clever for that. Instead it finds humour in the mundane, staying for away from the obvious and easy but finding gold everywhere else.

I feel like the word “mockumentary” was not invented for a film like this. Mockumentary, with the word mock front row and centre, seems better suited to something like Spinal Tap. A movie like Man Bites Dog, however, should have its own set of rules. 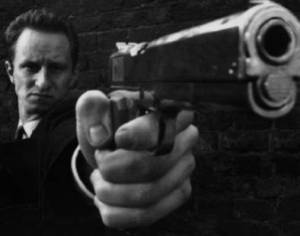 in the news. A (fake) documentary team is following and filming a charismatic serial killer named Ben as he commits his increasingly gruesome crimes. Of course the crew gets drawn in and soon find themselves to be accomplices. Ben takes advantage of the rolling cameras to boast about the murders he’s racking up, but loves the sound of his own voice so much delivers stream-of-consciousness monologues on just about any subject.

It doesn’t exactly surprise the audience that he’s a misogynist, a racist, and that he preys on the elderly. We witness his crimes in graphic detail. Yes, it’s horrible to watch the crew help to subdue a young boy who will then be smothered to death. Not for everyone. But this is not a violent for no reason film. Remember the mock part? Well think of it more as satire, or critique – a sad, sad critique of what sells at the movie theatre, or for that matter, on your 6 o’clock news. Why are we attracted as a society to serial killers, why do we find so magnetic, and why do so many seem to glorify them? Serial killers are the new icons. The media isn’t about the story, which is horrifying, but about the personality. We often learn more about the man committing the crimes than about his defenseless victims. If you think back to the last school shooting, for example, you are more likely to know the name of the gunman than the name of the innocent kid that he shot.

This is a highly interesting film out of Belgium, shot on a dime as I understand it, but it has 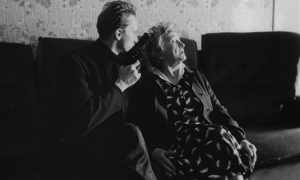 garnered quite a cult following from people who recognize it as intelligently deviant. I found it hard to watch but I liked the questions I found myself asking. Plus, I learned how to successfully sink the corpse of a dead baby, and how to save a bullet by scaring the elderly to death, and that seems like it’ll come in handy, right?