This movie was primarily filmed on location in Schenectady, New York. Schenectady literally means “beyond the pine plains” in Mohawk, so now you know where writer- 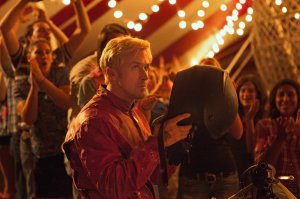 director Derek Cianfrance got the name (it’s where his wife grew up). As for what it’s about, well, that’s another story.

It’s about a motorcycle stunt driver played by Ryan Gosling who finds out he impregnated a carnival groupie the last time he was in town, so he drops out of the circus in order to be a Baby Daddy, except the groupie (Eva Mendes) already has someone to help raise her child (Mahershala Ali), so there’s not a lot of extra room for a bum. In order to show what a good provider he can be, he and his buddy (Ben Mendelsohn) start robbing banks. And you know what? It actually works. For a little while, they’re almost a happy family. But robbing banks is a risky business that eventually catches up with him. Enter trigger happy cop guy (Bradley Cooper). Later

Cooper will be remembered as a hero but we’ll all know he’s dirty. And what do dirty cops do? They run for public office!

It’s an interesting movie because it’s about that place where two lives intersect, and how quickly they can change the course of each other’s lives. And it’s also about legacy, and the burden that the little carnie baby is going to carry with him for the rest of his life. The Place Beyond the Pines is a search for truth; it displays the emotional intensity that the Gosling-Cianfrance combination brought in Blue Valentine (which I love but can’t stand to watch). And it reminds us about the shades of grey in everyone: how the “bad guy” bank robber can rock his baby gently to sleep, and the “good guy” cop can be corrupt as hell.

5 thoughts on “The Place Beyond The Pines”