What a fucking movie, eh?

Chris Nielsen (Robin Williams) dies in a car accident and wakes up in an afterlife of his own making. The world he constructs is based on his wife Annie’s painting; everything is made of gobs of paint that squish beneath his feet as he walks and explode with colour when he grabs them. An old friend, Albert (Cuba Gooding Jr.), appears as his spirit guide, though he looks much younger than Chris remembers. It takes a little getting used to, but it starts to feel like home, especially when he reconnects with his children, who died years previously. The only thing missing is his precious Annie, but Chris finds out that the two will never be reunited. Annie committed suicide – she’s in hell, and there’s no coming back from hell. But Chris tries anyway, because heaven isn’t heaven without her.

What Dreams May Come is preachy even if you believe in this stuff, and if you don’t, well, it’s a hard message to swallow. We never get a glimpse of God yet we’re left wondering what kind of deity would kill all of Annie’s loved ones – her husband and both her children, in two separate accidents – and then judge her when the pain is just too much. It seems monstrous and unfair and is even harder to watch in light of Robin Williams’ own suicide.

But visually – well, even now, 20 years on, it’s unlike anything you’ve seen. While the heaven-scapes are vivid and sometimes downright magical, it may be the visions of hell that haunt you. Robin Williams tiptoes through a carpet of faces – anguished people buried up to their necks, barely more than the holes necessary for breathing left exposed. The faces are pale and full of yearning. It’s awful – and it’s really awful when there’s nowhere for him to walk but over them.

Colours can be quite dominant – a blue tree a sad link to Chris’s past, the bright yellow of an eternal sunset, the red flames of hell. What Dreams May Come was one of only a few films shot on Fuji Velvia (RVM) film stock. Velvia is a type of film used most frequently for still photography of landscapes and other subjects because of its very high color saturation. It is only rarely employed for cinematography, usually when special effects are required – and boy were they! But these shocks of colour always mean something, whether in the afterlife, of simply through a flashback.

The “painted world” sequence is glorious. By building upon computer software developed by technical advisor Pierre Jasmin, a team devised a method of applying paint strokes to moving images captured on film so portions of the movie look like a three-dimensional moving painting. There are brush strokes that looks like you could reach out and touch them – and your hands would come away wet if you did. Live-action scenes were turned into living paintings with the optical flow technique, by which you track every single pixel in a moving image – in the end, it amounts to a layering of perhaps 10 different depths onto one image. See below for a comparison, before and after the effect is added to a scene: 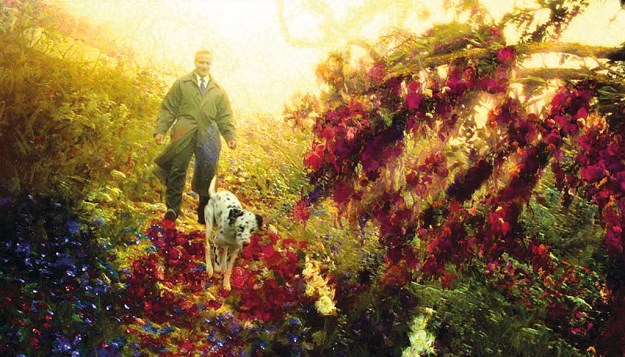 This film was both breath-taking and ground-breaking; many of the programs used had to be written specifically for the film. One of the most moving images is of a particular tree that almost serves as a connection between the soul mates, though one is living and the other dead.

Rendered using L-System software, a program for defining the algorithmic development of plants and branching structures, the tree was designed with thousands of branches and 500,000 leaves, all of which are blown off and scattered in the wind. It is spectacular and heart breaking to see.

What Dreams May Come won the 1999 Oscar for Best Visual Effects.

7 thoughts on “What Dreams May Come”