I read this book so enthusiastically, savouring each word, until the last few pages dumped me abruptly at the end feeling like I’d been robbed, liked Lowry simply hadn’t known how to deal with her little utopia, and so hadn’t.

When I saw that a movie was being released based on her novel, I was intrigued (Jeff Bridges! Meryl Streep!) but wary. 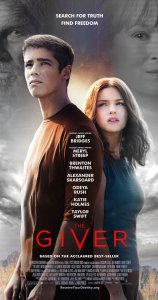 We follow Jonas (Brenton Thwaites) in his 12fth and 13th years. He lives in a community rebuilt after “the ruins” with a goal toward sameness. People’s memory of the past has been erased. They feel no pain but also no emotion.  Everyone is equal. Their lives are governed by strict rules that dictate everything from mealtime and career to partnership and procreation. When it’s Jonas’ turn to be assigned a role by the Chief Elder (Meryl Streep), he is selected to be the Receiver of Memories. Jeff Bridges is the Giver of Memories, and his job is to bear the weight of all mankind’s memories for his community, the good and the bad, and then pass them along to the next generation’s Receiver for safekeeping. The process is intoxicating to young Jonas, who has never felt snow, or known song, or seen joy. The Giver must take things slow, however, because more complex memories like war and vengeance and hatred must also be passed along, and the last time he tried to do this was to his own daughter (stunt-casting goes to: Taylor Swift) and she wasn’t up to the task.

Jonas starts to feel that it isn’t right keeping back all these memories but this is their way of life, and even his own friends and family are not easily convinced.

I find myself attracted to utopian-dystopian fantasy fiction. The Handmaid’s Tale by Margaret Atwood is one of my all-time favourite anythings. The Giver, however, starts out promising only to disappoint, and the movie is no different – well, maybe it’s worse. Meryl Streep seems to be at half strength in this movie, no back story or motivation to give us a clue. Jeff Bridges mumbles through his part. The kids are uninteresting, including the so-called hero. Alexander Skarsgard seems a strange choice as Jonas’ father, doing unspeakable things unquestioningly. Taylor Swift pops up for a minute or two, cringingly, seemingly only as a great white hope to bring tween interest to the movie since it’s unclear who else to market to. Only Katie Holmes is well-cast as an empty, robotic stepford wife

Did I enjoy this movie at all? I apologize. I did not.