Want to feel old? An American Tail is 30 years old this year. Hits you right in the nuts, doesn’t it? 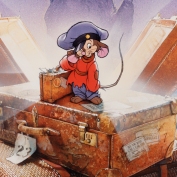 I found it in Walmart’s $5 bin and couldn’t resist, having fond if hazy childhood memories of it. Rewatching it recently, I was astonished that Sean and I could still sing along to many of the songs (“There Are No Cats in American” being a favourite) and I couldn’t help but wonder if this sweet story would get green-lit today.

An American Tail is the story of a Jewish-Russian family of mice (brilliantly, the Mousekewitzes) who get chased away from their home by terrible cats who sack and destroy at will. They board a ship to America (where allegedly there are no cats) but during their crossing young Fievel gets separated from his family. Landing in America one family member short, the Mousekewitzes are in mourning. Fievel, for all intents and purposes an orphan, gets thrown into all sorts of immigrant horrors (forced labour, for one), and the whole family is dismayed to discover that yes, there are in fact cats in America. Have they simply traded one set of tyrants for another? 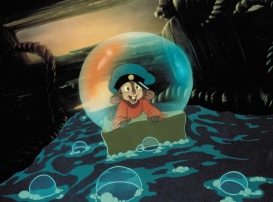 I’m fascinated by this immigrant story, an allegory in the vein of Animal Farm, but geared toward children. It was personal for producer Steven Spielberg; some scenes were taken directly from stories of his own grandfather, not coincidentally named Fievel.

Featuring voice actors such as Madeline Kahn, Christopher Plummer, and an unforgettable turn by Dom DeLuise as a fat cat with a soft squishy heart, the characters leapt off the screen and into our hearts. Darker than the typical Disney movie of its day, it still had lots of singable songs, notably ‘Somewhere Out There’ adorably screeched by out-of-tune mice in the movie, but made fit

for radio by Linda Ronstadt and James Ingram at the behest of Spielberg, who knows a good pop tune when he hears one. It went on to win Song of the Year at the Grammy as was nominated for an Oscar (but lost to Take My Breath Away, from Top Gun). We remembered this song in particular when James Horner passed away last summer – he was of course the film’s excellent composer.

An American Tail went on to be a box office hit – the highest-grossing non-Disney animated film at the time, in fact, despite the fact that Siskel & Ebert

gave it two thumbs down, calling it “gloomy”, “downbeat”, and “way too depressing for young audiences.” The numbers proved them wrong, and never had children so gleefully sang about Cossacks and oppression before. The film’s success inspired Steven Spielberg to pursue this cartoon making, eventually developing DreamWorks Animation, the studio behind Shrek, Madagascar, and How To Train Your Dragon. An American Tail has held up pretty well over time, in part because of its deliberate old-fashioned animation style, hearkening the glory days of 1940s Disney, a huge nostalgia factor for baby boomers. Finally this

was a film they could not only share with their children, but enjoy it as well.

Fievel’s brave adventure and soft, floppy ears has stayed in a small corner of my heart all these years later. It’s a story about freedom and family that spoke to a little girl named Jay in a tutu and maker tattoos.

16 thoughts on “An American Tail”