I have been on the Dave Eggers train since A Heartbreaking Work of Staggering Genius (it’s exactly that – you should read it) but over the years he’s proven he writes fiction just as well as non, a

nd so of course this book was immediately on my nightstand and then devoured into my brain and then shelved politely to await its fate. Little did it, or I, know that just a few years later it would be turned into a movie, prompting Sean to finally give it a read as well (don’t judge him too harshly, he’s mostly literate).

A Hologram for the King tells the story of Alan, a washed-up American businessman in Saudi Arabia trying to make a pitch to the king. This contract will save him from untold embarrassment; back home he has debt everywhere, a resume full of failures, and an oblivious daughter in an expensive college, with tuition due. But the king’s not biting. In fact, the king’s not even around, and this supercity he’s building is languishing in the desert. And poor Alan has nothing better to do, and no choice really, but to sit around and wait.

When Sean was done reading it, I decided to give it a re-read myself, because we both 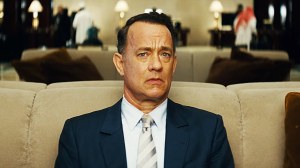 struggled to picture Hanks as Alan Clay. Alan is a loser. He’s beaten down by life, but not in Hanks’s usual sad-sack way. He was too pathetic. But Tom Hanks is not only starring, he’s producing, which means he really likes this project, and he knew what he was getting into.

Tom Tykwer wrote the screenplay and directed the movie, and he made some disappointing choices (he’s also responsible for both Cloud Atlas and Run Lola Run, so you decide whether the man’s a genius or a sadist). I’m too fond of the source material, and every time the film swerved away from it, I grimaced. And some of those edits were undoubtedly good. I just couldn’t give it a fair shake. Would I have enjoyed the movie more had I not read the book?

Tom Hanks is lovely here. This is maybe not as complex a character as his best work usually involves, and that’s kind of true of the movie as a whole: it’s just a little superficial. He plays an everyman – except Alan is actually supposed to be more of a tragic hero a la Death of a Salesman; this version of Alan feels watered down. And he’s supposed

to be a fish out of water – not just the cliched culture clash crap of an American abroad, but of an aging salesman with an old bag of tricks in a newfangled world of young, tech-minded colleagues. The world is shrinking, and moving quickly, and Alan is getting left behind. Movie Alan has more verve than Book Alan, which sounds like a strange thing to complain about, but the truth is, the world already had enough of these Alans. For a movie that could have been refreshingly unHollywood, it sure made some safe choices and went for the audience-friendly ending that smacks of missed opportunity.

Verdict: See it for Hanks, eventually, but you can probably skip the cinema.

18 thoughts on “Tribeca: A Hologram for the King”