I hate being right.

Haha, okay, no I don’t. I love it. I knew I’d hate this movie, I avoided it like I feared it might give me Zika, and when I finally did break down and watch (because it was the fare being offered on the first night of drive-in season), I hated it even more than I’d anticipated. That uptick is maybe partially your

fault. It’s received some fairly positive reviews so I had hope that it wasn’t as bad as my gut was telling me. But now I know the truth: either the movie-going public are idiots, or they talk up a bad movie in order to trick others into paying to see it too, thus assuaging their guilt and annoyance at having sat through it themselves.

Self-righteous, much? Yes, I enjoy being that too. But I truly did loathe this movie. I had little to no interest in seeing this movie and was relieved when Matt said he’d cover it for us (being a boy scout, he felt he had some personal connection to the material). But guess what? Matt never saw it, the chump, and he’s left it to me to attack people’s childhoods. I can only assume that’s what it’s about. I don’t have any warm fuzzy feelings attached to the 1967 animated version of this one. I could have hummed some of the bars of the more popular songs, but couldn’t have told you the plot. But the minute  I heard it was live-action, I was out. Forget it. Realistic-looking animals that still for some reason talk? I couldn’t fathom how this would be done well.

Neither could Jon Favreau, as it turns out. And the thing about realistic-looking 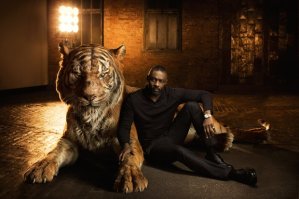 animals is that they’re still cartoons. They’re very accurate, very expensive cartoons, but it’s just some fancy animation that makes it harder for me to anthropomorphize but doesn’t stop them from breaking out into song. The tiger is so menacing looking you can practically smell the rotting meat caught between his yellowed 3-inch teeth, yet he has the velvety smooth voice of Idris Elba. Bill Murray was a nice choice for the more playful Baloo, but let’s remember that Baloo is still a bear. A sloth bear, sure, but a bear’s a bear. Sloth bears are usually known to be docile for a bear, but they’ll still attack humans who encroach upon their living space, and Mowgli doesn’t just encroach, he fucking rides him! And 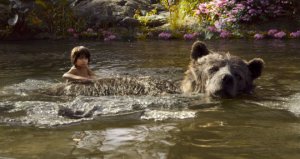 then there’s King Louie, the big-ass scary mother fucking ape. Modeled after Apocalypse Now’s Colonel Kurtz, King Louie is a gigantopithecus, an ancestor of the orangutan, who in real life would have been about 10 feet tall and over 1000lbs. He’s hostile AF but he’s oddly voiced by Christopher Walken. Now, I love Walken almost as much as his mother does, but it was a weird and jarring choice. King Louie is scary, but Walken’s voice is far from it. He’s got the voice of a stand-up comedian or a jazz band leader, it’s one of the most recognizable voices out there, and it didn’t belong to this ape. And then he breaks out into a show tune, which is NOT something Colonel Kurtz would be caught dead doing, so the tone of the movie just falls apart like the chain falling off of a bicycle, and the whole thing just stinks. Stinks! And not just because it’s a temple full of monkeys.

So why bother making a “live-action” version of the movie when there’s only a single live thing about it? Neel Sethi as little Mowgli is pretty charming, but he never met a single animal during the filming of The Jungle Book – which is a good thing, because seeing a small boy in the arms of

a black panther makes most adults want to scream “Run you little idiot!” In fact,  Jim Henson’s Creature Shop was brought in to make puppets for Sethi to act against, but those were completely replaced with CGI versions later. And as for the lush Indian landscape, it’s 100% phony too. The whole thing was filmed on a back lot in smoggy Los Angeles with a blue screen and some Styrofoam painted to look like jungle.

Tonnes of people loved this movie and I’m not one of them. If you’re going to 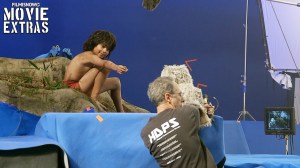 give me talking animals, that’s fine, but they’d better also have careers and pants and fart jokes. If an animal looks real and normally eats people, I don’t want to see him dancing around with a man-cub. I have zero tolerance for this movie and as far as I’m concerned, King Louie can kiss my ass.

32 thoughts on “The Jungle Book”