No, I’m not trying to conjure him. I’m just trying to remind myself why I put myself through this in the first place.

I first watched and liked Reynolds when he was on a TV show called Two Guys, A Girl, And A Pizza Place. Yes, it’s a terrible name, and surprisingly, they shortened it a couple of seasons in to just the Two Guys & A Girl (even more surprising that there were a couple of seasons). Horrid as the show was, I’ve liked Reynolds on a scale sloping markedly downward ever since, probably because he’s coasted on being a pretty but empty husk of a

man. In fact, the more I think about this, the more I realize I didn’t watch this to see if Ryan Reynolds is capable of breaking the mold. I watched it for the talking animals.

The premise: Jerry is just a normal, likable guy who happens to have pets who can talk to him. His cat, Mr. Whiskers, is particularly evil, as I completely expect all cats are, so no one is overly surprised when the cat takes things to a sinister place when an office-crush stands Jerry up for a date. The only thing more satisfying than wet cat food is gruesome serial murder!

The movie is actually kind of interesting in a way – it does a good job of showing us Jerry’s psychosis by giving us contrasting views of what he’s experiencing vs. what everyone else is experiencing. The difference is chilling the first time you notice it, and it’ll haunt you for the rest of the movie.

Jacki Weaver is a stand-out as his court-appointed psychiatrist, which you can 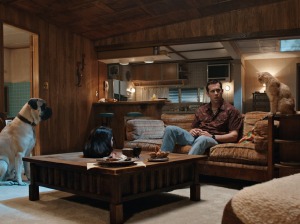 imagine is a doozie of a job. Weaver is always a delight, a god-damned delight, and she’s an excellent stand-in for the audience as Jerry moves from cute to creepy. Is Reynolds any good? It’s clear he’s really into this role, but he kind overdoes the vacant eye thing. Unless those are his real eyes and he’s been wearing convincing puppy dog contacts this whole time! But he’s got a touch of that pre-Deadpool, charming psychopathy that just kind of works.

I’ll make no bones about it: ‘The Voices’ is an odd duck. I’d venture to call this a black comedy, but I’m also wondering what’s blacker than black? Okay, just Googled it, and here’s the scoop: there is in fact a colour blacker than black, and it’s called Vantablack. It absorbs all but 0.035% of light. It’s so black that our puny little brains can’t even understand it, so if you were wearing a Vantablack unitard, your hands and feet would appear to be floating around magically. Which is about right for when your Scottish-accented cat tells you to behead the pretty blonde and stash her in myriad tupperware. You heard it here first, folks, a new genre called the Vantablack comedy, only to be unfurled when the black just doesn’t cover it. It’s the kind of movie you should list on your internet dating profile just to suss out the wackos who respond “Me too!” It’s a great barometer for the people you don’t want to meet in a non-public place, and if you dare to date, then do not stand them up, and if stand them up you must, be sure to call your mother and tell her you love her first.

The Voices isn’t as funny as it thinks it is, and never achieves any true suspense. If you take it at face value you’ll find some cheap voyeuristic thrills, and a good dose of madness (served cold, without the insight sidedish). So yeah. This one’s memorable if you embrace the wacky and don’t mind the macabre.

35 thoughts on “The Voices”