Like most people our age, we have a copy of Memento in our DVD collection, and the cover of that copy declares itself a “masterpiece.” While I’m not entirely sure I agree, it IS an achievement and for many of us, a turning point in movies. It may have been the first Christopher Nolan you saw, but I doubt it was your last. 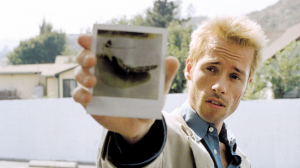 It’s the story of a man looking for his family, like Finding Dory only more murdery. Okay, it’s nothing like Finding Dory, but Leonard (Guy Pearce) genuinely can’t form new memories, and he’s not so much looking for his wife as looking for her murderer. The story is ingeniously (and frustratingly) told frontwards AND backwards, colour sequences alternating with black and white, creating a disorienting narrative that mimics the character’s confusion. The two story lines eventually meet, but this technique manages to build both momentum and tension in ways we hadn’t experienced in a good long while.

Leonard uses tattoos and polaroids in place of memories but it’s not a perfect system as pictures can lie, and both are corruptible. The movie winds up being as much a trip for us as it is for him, and Memento spawned a lot of copycat movies and a new “mindfuck” genre.

It absolutely demands to be rewatched and nearly every time you do you find some new detail that requires much discussion over pie. You’re no film snob

and certainly no Asshole if you don’t obsess over this movie at least semi-regularly.

Lucky for you, Toronto, there’s an exclusive screening in 35mmfor TIFF and ROM members at the TIFF Bell Lightbox this Sunday July 10 2016 at 1pm as part of the Royal Ontario Museum’s current exhibition, Tattoos: Ritual. Identity. Obsession. Art. All proceeds from this event will support TIFF’s film preservation and projection efforts, including the ongoing presentation of 35mm films.