I went into this film at the New Hampshire Film Festival having been warned by Anna at Film Grimoire – not warned against it, mind you, but warned that it

was…unusual, intense, disturbing. I wasn’t even sure I wanted to see it. You may know by now that Jay and horror don’t mix. But Sean was keen despite my own warnings, so we hunkered down in the same beautiful theatre where I barely survived watching The Witch last year and hoped for the best (ie, dry pants when all was said and done).

Anna felt that the less you knew about this film going in, the better, and I agree. But I do feel compelled to tell you that it is not a traditional horror film, by which I mean: I was completely fine, didn’t cover my face even once, but Sean, shaken and pale when we left the theatre, confessed to 0% when I asked how much he’d enjoyed the film. “Enjoy” is the wrong word.

It’s about a young girl living on a farm with her immigrant parents. She witnesses the brutal murder of her mother (at the hands of a super creepy serial killer played brilliantly by Will Brill) and in some ways the even more brutal response to the murder by her father. Basically, she’s warped. As a little girl with certain proclivities, this trauma pushes her over the deep end and she deals with it in ways that most of us only encounter in nightmares.

Shot in stark black and white, the cinematography can be disturbingly 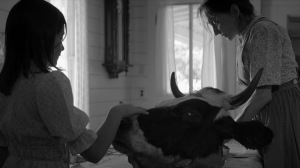 beautiful for such a twisted movie. The monochrome may lessen the impact of the gore but it only serves to heighten the intensity of the atmosphere, creating a world I was never sure of, never trusted. So while there’s little in the way of jump-scare, there’s plenty of hair-raising all the same.

Do I recommend it? It’s interesting. It’s unique. It’s creepy as fuck. I found it bearable, but the suspense is unrelenting. I had to buy Sean a Fred Flintstone nightlight, so I guess your “enjoyment” of this film will depend a lot on your tolerance for depravity.

24 thoughts on “The Eyes of My Mother”