Imagine being stranded on a deserted island. Would you wish for company, even though you knew that that person would then be stranded too? What if you discovered that you had the power to make that dream come true?

Jim (Chris Pratt) faces a futuristic version of this very dilemma in Passengers, director Morten Tyldum’s follow-up to The Imitation Game. Jim, along with 5,000 others, has chosen to leave his life on Earth to start fresh by colonizing a distant planet. When his hibernation pod malfunctions, Jim finds that he has somehow woken up 90 years before the ship is scheduled to reach its destination. Meaning that he will almost certainly die of old age long before he’ll get the chance to even speak to another person. 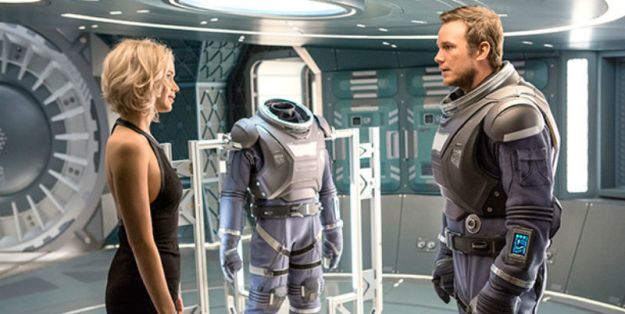 The loneliness is palpable but becomes downright excruciating once he discovers that he’s figured out how to wake another passenger. One sleeping beauty in particular has caught his eye. Aurora (Jennifer Lawrence), as Jim discovers through extensive research of the ship’s files, is smart, pretty, and funny and seems like the perfect companion for this 90 year voyage.

It’s quite an interesting predicament. What if Tom Hanks had gotten so lonely in Cast Away that he was able to magically sentence Helen Hunt to life on the island with him? Or if James Franco had been able to trap his buddy Seth Rogen under that rock so that he would have some company? Obviously, it’s a pretty shitty thing to do to someone and Jim knows it. He doesn’t take the decision lightly and it’s a tribute to Pratt’s talent that we can feel his struggle enough to forgive him.

Passengers begins to unravel though once Aurora wakes up. A brief meditation on what isolation can do to a person quickly becomes a typical romantic comedy with an atypical setting. Boy meets girl based on a lie. Everything seems to be going great until girl discovers lie. Girl makes up with boy. If you think the fact that Jim’s deception is somewhat more serious than a How to Lose a Guy in 10 Days article (“He murdered me,” as Aurora puts it) would alter this formula in any way, unfortunately you’d be disappointed.

It’s also worth commenting that Jim chooses Aurora for her looks and charm. Yes, she’s actually quite bright but she’s a journalist. Out of 5,000 passengers, you’d think he could have found someone more qualified to help maintain a spaceship for 90 years and maybe even help him figure out how to get back to sleep. She’s clever and tough but still pretty useless once the ship starts to fall apart and Jim the mechanic needs to figure out how to save her and everyone else on board, thus winning back her heart. The cop-out is downright insulting.  Besides, as cinema, watching someone fix a broken spaceship is neither as suspenseful or exciting as you might think.

What many critics panning Passengers won’t tell you is that the first 20-30 minutes are actually quite gripping. From there on it’s pretty much as bad as they say.