I hadn’t seen my friend Josh in months and was eager to tell him all about the exciting new movie I saw at the Fantasia Film Festival. “I just saw The Honor Farm and I’m still trying to figure it out,” I told him while seated at a nearby Mexican restaurant. 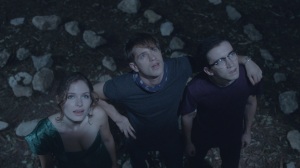 standing right over me until he chose this moment to cut me off. “I just saw that,” he complained. “It was terrible“.

I didn’t really want to get into it with this guy nor was I even confident that I had understood the film well enough to defend it so I just smiled politely as he told me that it wasn’t even scary. I bashfully admitted that I was the guy who jumped and cried out during the final act. 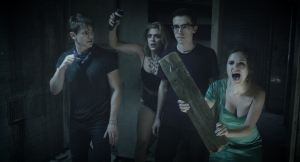 The Honor Farm is exactly that kind of movie. It’s the kind of movie that you need to let sink in while you ignore those who will immediately and loudly dismiss it. Lucy (Olivia Grace Applegate) seems to feels like she’s just going through the motions as she prepares for her prom. After her drunk date embarasses her and tries to force himself on her, she reluctantly agrees to accompany her best friend Anne (Katie Folger) and a classmate she barely knows into the woods to take shrooms in an abandoned prison farm.

Other than that, the less you know about The Honor Farm the better. Although you should probably be warned that horror fans like the one described above may be disappointed. Because the set up seems bloody perfect. Eight teenagers, most of them seeming to fit a typical scary movie stereotype, entering a creepy prison on prom night might make you start placing bets on who will be first to die but this isn’t your typical scary movie. What follows is truly surreal and genre-bending and few of these character arcs play out like you’d expect.

I may have been a little lost during the closing credits but The Honor Farm keeps getting better the more I think about it. And I’ve been thinking about it a lot.

6 thoughts on “The Honor Farm”