I chose this movie because: Jim Gaffigan. God I love him. He’s a stand-up comic whose act for many years concentrated on his 5-kid, 7-person family living in a cramped 2-bedroom apartment in New York City. He’s a family man and a good Catholic whose only sin is gluttony. I shouldn’t like him or relate to him, but he’s a genuinely funny guy, and I can never get enough (he’s got some comedy specials on Netflix and a couple of books at your local library and commercials for mini vans and KFC). So when I heard he was in a movie screening at SXSW, I was on board, no questions asked.

In You Can Choose Your Family, he plays Frank, a father and husband who is often absent, travelling on business. Once high school sweethearts, his wife (Anna Gunn) feels like she hardly knows him anymore, and his son Philip (Logan Miller) feels like his father 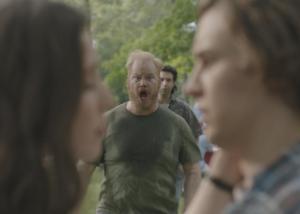 has never known him. Philip and his father are always clashing, and Philip can’t wait to get far, far away from his family when he goes to NYU next year. But for now he’s trapped in his father’s house, living by the rules that Frank isn’t even there to enforce. So when Frank flies to Japan on business, Philip thinks it’s the perfect opportunity to go blow off some spring break steam. But what he finds there is not what he bargained for: it’s his dad…and his dad’s second family. Oh, fudge.

So of course Philip blackmails him for all he’s worth. But now that there’s a crack in the secret…well, cracks always get bigger, don’t they? Director Miranda Bailey bills this as a comedy, and the Jim Gaffigan casting would seem to back that up, but this is a pretty unfunny situation that I suppose we’d better laugh at, because the other option is unthinkable. Bailey admits that she’s got some daddy issues to work through, and really, who doesn’t, but laughing at them kept me squirming, and huffing, and burying my head in my hands. If you really stop and think about how you’d feel – as either the child or the spouse – having your relationship and in fact your entire life be usurped by replacements – well, that’s a horrible feeling. And horrible feelings can only exist for so long on film before we’re obligated to break them up with some laughs. Is this a comedy? I wouldn’t go that far. But it was an interesting, sometimes funny, film that will make you appreciate the family you do have, whatever that is.

Note: this film has since been renamed Being Frank.

7 thoughts on “SXSW: You Can Choose Your Family”