Nina is an acerbic stand-up comedian who boasts on stage about not dating because it sounds a lot better than admitting the affair with the married cop who hits her (Chase Crawford). She barfs after every set. So it seems like the perfect time to flee New York and purse her dream in L.A. of landing  a role on Comedy Prime (an SNL stand-in).

Nina (Mary Elizabeth Winstead) has some professional success there, but her personal life suffers – and we know it didn’t have far to fall from. For the first time in her life, she lets a good guy (Common) get close to her but she’s flailing. Her new roommates (Kate del Castillo, Clea DuVall) model a new and healthy way of living but Nina can’t reconcile it 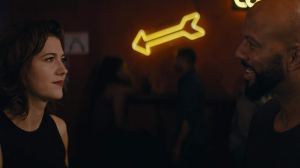 with her own life, and I’m not sure she believes she deserves that level of happiness anyway. In fact, the closer she gets to good things, the more she sabotages them. Ultimately she’ll have a bit of a meltdown on stage that results in a viral video of some powerful truth-telling that her audience may not be ready for. Just about the only thing that video doesn’t threaten is her strength.

Director Eva Vives pulls together a terrific female-forward ensemble (Angelique Cabral, Camryn Manheim, Mindy Sterling),  to achieve this thoughtful look at what it means to live an authentic existence, especially for a woman in 2018. As her new boss Larry Michaels (Beau Bridges) tells her, the audience only thinks it wants truth – in reality they need it to be heavily curated.

[This reminds me of the very best stand-up comedy I’ve seen this year – Hannah Gadbsy, who has a special called Nanette. It’s on Netflix. It’s spectacularly funny but also very raw and angry and honest, which makes it a breath-taking, astonishing piece of art. Seriously. You should watch.]

Nina’s passion is motivated by pain. We are certain that her anger is covering for something, but she allows so few cracks that we don’t easily find a way in. Mary Elizabeth Winstead has a long cinematic history of being wonderful and this performance in particular is a brave kind of perfection. It’s like watching a pot boil, with its own internal tension despite knowing what’s coming. Vives sets up these emotionally intense scenes and allows Winstead to smash them out of the park. All About Nina will live to its name. It distills all the frustrations and rage we have as women, every struggle we have between delicacy and strength, independence and cooperation, self-interest and support. It’s a messy road, but beautifully walked.

6 thoughts on “All About Nina”