Juliette Binoche is extraordinary, really. Behind those gorgeous, liquid brown eyes, there’s a bit of a mystery. There’s a natural sensuality to her, but under the direction of Claire Denis, that turns into a raw eroticism, and Denis knows just how to turn that up.

Isabelle has many lovers but no loves. And maybe she’d like one, a true love, a forever love, but the truth is, she can barely manage the one night stands. She’s exceptionally 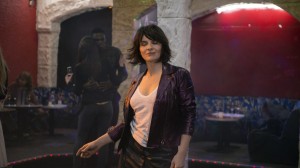 bad at choosing men. They’re all unavailable. Her best effort is a married man who’s bad in bed AND rude to waiters. Nothing going for him! He’s not even cute! And he’ll never be hers. So why then is she so hurt when he continues to never leave his wife, as promised? Why does she cry over men who don’t deserve it? She’s a beautiful woman, a tender, open artist. Everyone is entitled to one bad boyfriend. But a string of them starts to look like a pattern, and you’re the one picking the wallpaper. So what the hell is wrong with Isabelle?

She cries at night, every night. She’s miserable. She’s suspicious of men. She moves too quickly and is even quicker to anger. She’s ricocheting between men, wracking up a score, but she never wins the prize. As much as I can dislike Isabelle, Binoche gives her a vulnerability that is hard to hate entirely. She tries too hard, she wants it too much. She’s so desperate she goes to see a psychic (Gerard Depardieu) for advice. And she’s the type who wants so badly to believe him. Her tears guide him into saying exactly what she wants to hear. We all have that friend who just keeps screwing up her love life – we can see it coming a mile away, so why can’t she, an otherwise intelligent woman? Isabelle is that woman and Claire Denis knows her intimately.

9 thoughts on “Let The Sunshine In”