Nemo first appeared as a stuffed toy in Boo’s room in Monsters, Inc. (2001). Finding Nemo went on to tease two more future Pixar films: A kid in the dentist’s office is reading a Mr. Incredible comic book, and Luigi the little Fiat who runs Luigi’s Casa Della Tires in Cars drives by outside. But most of all, Finding Nemo gave us reason to love clown fish again. Marlin is a neurotic widower and overprotective single dad. His young son Nemo has a fin deformity thanks to a childhood accident but isn’t nearly as crippled by it as Marlin’s panic would indicate. Still, when Nemo is kidnapped by a dentist and hauled off to a fish tank in Australia, it’s kind of not great. Marlin has to confront his fears by navigating an entire ocean in order to save his son, and his only help is a forgetful sidekick named Dory.

You may have heard that Sean and I are at Disney World this week, with our two young nephews, Brady, age 7, and Jack, who will turn 5 while we’re there. The last

and only other time I’ve visited the park, we were with Brady, aged just 18 months; Jack, though it’s hard to imagine life without him, wasn’t more than a twinkle. Finding Nemo was already wholeheartedly represented in the park. There’s an excellent 40 minute musical in Animal Kingdom, where large puppets are manipulated onstage. Epcot has a 5.7 million gallon saltwater aquarium filled with live sea creatures and Finding Nemo’s real-life counterparts. You ride a clam-mobile, and the ride simulates the animated characters swimming alongside the real fish, searching for Nemo, who really should 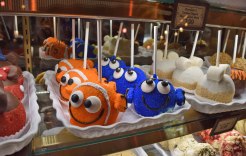 know better by now. They’ve also got Turtle Talk With Crush, which is a big hit with kids. Crush is the really cool sea turtle brimming with surfer dude wisdom. Kids see him animated on screen, and by the magic of Disney, he’s able to speak to them directly. Some guy behind a one-way mirror provides a live, interactive experience. It’s thrilling for kids when Crush says “Hey little girl in the green dress – I like your pigtails, dude!”

There’s a similar experience over in the Tomorrowland section of Magic Kingdom. It’s called Monsters, Inc. Laugh Floor, and like Turtle Talk with Crush, it’s digital puppetry, with live actors performing voices behind a large digital screen, while computer-rendered monsters appear with the actors’ voices. Mike Wazowski hosts a stand-up comedy routine. You may remember in the movie, Mike and Sully are a team working for a factory where monsters sneak into children’s bedrooms to scare them, and collect their screams for power. By the end of the movie, the monsters

have made friends with a child, and it is discovered that laughter yields ten times more power than screams ever did. Hence, a comedy club, where monsters are brilliantly using Disney World patrons to collect their laughs. When Sean and I were there 5 years ago, I was the audience patsy. I somehow got roped into the show, and there was some light roasting in my direction, but the actors behind the screen kept calling back to me throughout the show, much to Sean’s (and my brother-in-law’s) amusement. These are pretty cool attractions – the interactivity means they have to be manned (or peopled, or monstered) by some well-trained talent round the clock. These people have to be good at improv, but they also have to stay in character, and work the crowd, and keep in mind they’re turning over audiences every 10 minutes.

Disney does such a great job preserving our favourite films, and bringing them to

life via not just rides, but all kinds of wonderful small detail in the park – check out these Finding Nemo candy apples, or this Monsters-inspired dress, which okay, spoiler alert: I am wearing. And the matching Mike Wazowski purse that I am probably right this very minute weakly resisting buying. And even more exciting, check out these themed rooms available at Disney’s Animation resort. We’re staying in a Cars suite with the boys, because it’s their absolute favourite. Everything at Disney is kicked up to 11.