Jesse Owens deserved better.  Race is a movie that hits the points you’d expect but does it so mechanically that it has no momentum.  Rather than having the power of its Olympic sprinter protagonist, Race is soft and lumbering, like a darts competition at the local dive bar.

The only time Race really shines is during the one-on-one exchanges between Owens (Stephan James) and his coach, Larry Snyder (Jason Sudeikis).  Those conversations are funny, warm and real.  Unfortunately, those moments are few and far between.  It’s too bad that the film didn’t put those interactions into the foreground as that would have made for a much more
enjoyable movie.

Perhaps the problem is there was simply too much ground to cover.  Race’s story follows Owens through the course of several years during the peak of his career.  We flip back and forth between Ohio, New York, Berlin, Nebraska, Michigan, Los Angeles, and probably more places that I’ve forgotten.  We hit the athletic highlights, like Owens setting three world records and tying a fourth in less than an hour in 1935, and Owens winning four gold medals at the 1936 Olympic Games.  We touch on the hypocrisy of the United States’ threat to boycott those Berlin games at a time when racism and segregation were the status quo in the “land of the free”.  We gloss over the rest of Owens’ life by way of end titles and some nice photographs of Owens and family at various stages of his life.

There is a good movie in here somewhere but the plodding delivery sinks it (and the important-sounding score doesn’t help matters).  Race seems to want to be a message movie highlighting the aforementioned hyp 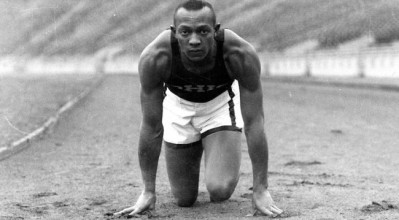 ocrisy by showing us the second-class citizenship of Owens even when he’s America’s hero.  If that was the aim, Race falls well short.  Painting Hitler and the Nazis as the bad guys is easy, and Race goes that route.  But the real story is more damning and I wish Race had told it as it happened.  At a political rally in October 1936, relatively soon after his triumphant return to the U.S. with four gold medals in hand, Owens said,  “Some people say Hitler snubbed me. But I tell you, Hitler did not snub me. I am not knocking the President….but remember that the President did not send me a message of congratulations because people said, he was too busy.”  Hitler reportedly shook Owens’ hand after his victories, while Franklin Delano Roosevelt couldn’t find the time to send Owens a congratulatory telegram.

The President’s indifference to Owens presumably lines up with the attitudes of white America at the time.  That may explain why Owens’ life after 1936 was a difficult one.  His amateur status was revoked when he tried to make some endorsement money from his Olympic success, and after lo

sing his amateur status he was reduced to racing against horses for show.  Later, Owens got by as a dry cleaner and gas station attendant (though “got by” may be generous as he declared bankruptcy and was prosecuted for tax evasion).  All in all, it’s a very sad statement.  Today, Owens is rightfully regarded as a legend but it seems that during his lifetime he was not treated like one, to say the least.  Race hints at that fate but doesn’t focus on it, and that’s a shame.

That’s probably the biggest reason that Race seems like an opportunity missed.  Coach Snyder would have called it a natural that lacks the work ethic required to be truly great. For its half-hearted effort, Race gets a score of five medals out of ten.