Herb and Charlie are best friends and brothers-in-law. Herb is the responsible one, Charlie the scamp. So of course it’s Charlie’s idea to scam a free cruise by pretending to be a dance instructor, and to trick his recently widowed bud Herb into doing the same (though at least Herb’s got some legit moves).

Of course, Charlie’s hoping to do more than just dance on this cruise; he’s hoping to score himself a rich wife. Herb (Jack Lemmon), still in love with his deceased wife, is not ready 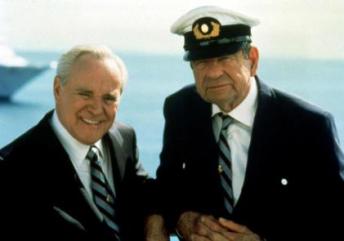 for the swinging bachelor existence Charlie has planned for them on board, but that’s only half his trouble. A snarky entertainment director is on to them and their little ruse could cost them thousands of dollars that neither can afford (hello, gambling my old friend!) if found out and no amount of Rue McClanahan flirtation can save them.

Matthau and Lemmon are of course good for some madcap hilarity. I’m struck by how physical Matthau’s comedy continues to be into his old age. This movie is pretty stupid plot-wise, but the chemistry between old pals Matthau and Lemmon is tonnes of fun and magical as ever. This is the 9th of their 10 collaborations and you never get tired of seeing them together. Does it make up for a weak script? Not really. But if you’re reaching all the way back to 1997, you’re doing it because these are beloved figures who crack you up doing their soft-shoe shtick, not because you’re expecting to uncover a hidden gem that’s somehow lain dormant for two decades. Jack and Walt were the OGs as far as Bromance is concerned. Matt and Ben have a long way to go before we’re willing to let them flirt so shamelessly with our grandmas.