Catherine is a gynecologist, successful and assured. Her home is beautiful, her teenage son accomplished, and her husband, David, a respected professor. But there’s a crack in all this perfection, one that gets exposed when David (Liam Neeson) misses his flight home, and thus, the perfectly executed surprise party thrown by his wife (Julianne Moore). Catherine quickly suspects there’s more at fault than just bad timing – can her husband, an incorrigible flirt, be having an affair?

Paranoid, Catherine hires Chloe, an escort, to get to the truth. She asks Chloe (Amanda Seyfried) to approach her husband and see what happens. Already we’re all groaning. Such a bad idea, a terrifically bad idea. The minute you start deriving tests of loyalty or 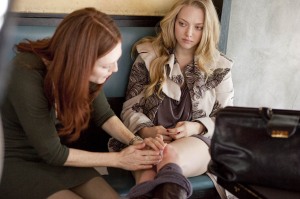 faithfulness for your loved one, you have a problem, and – spoiler alert! – it’s you. Although, guess what? The minute you start hiring prostitutes, you have a problem. Now Julianne Moore has two problems, and they’re multiplying like rabbits at a problem convention.

Atom Egoyan made Chloe in 2009: it was a good year to be Amanda Seyfriend, a bad year to be Liam Neeson (his real-life wife died during while this was being filmed – he took 2 days off), and a confusing time to be Julianne Moore, a woman at the top of her game, apparently reduced to making Fatal Attraction knock-offs. Chloe is supposed to be a psycho-sexual thriller, but there are at least 2 problems with that. One: it ain’t sexy. I mean, Moore’s character tries her very best to convince you that it is. She has Chloe describe her encounters in every lascivious detail, then rushes home, nipples taut, to masturbate in the shower. But the chemistry, which must have dripped off the page for these actors to consider it, is not evident on screen. Two: neither are the thrills. We see Egoyan’s twists from a mile away, because they’ve had their blinker on the whole time. Not only do I know where we’re going, I know exactly how we’ll get there. So yeah, both the sexual and the thriller in the psycho-sexual thriller are lacking. But at least there’s the psycho! Oh man, the manipulation is firing on all cylinders. It’s so forthright you might not even find it believable, or remotely plausible. I’m so glad that a movie veering off into left field doesn’t spoil its watchability for me AT ALL.

Moore and Neeson are very good actors, and they’re very good in this. Sometimes you even forget you’re watching a piece of shit. But not for long!