I’m watching Almost Famous and I know you don’t need to be sold on it. It’s terrific. But sometimes, between viewings, you forget how terrific. I’m just eleven minutes in, at the part when the sister, played by Zooey Deschanel, leaves and she bequeaths her record collection to 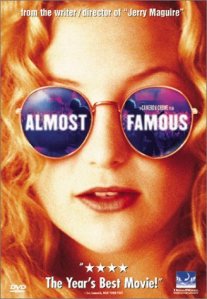 her little brother. He flips through those albums (actual saved albums of director Cameron Crowe) and dreams are born. Just watching him discover music that will open up his world wakes something up inside me, like the infinite possibility of childhood. Like you could fall in love with anything, any time.

Philip Seymour Hoffman gives a great performance; this is the first time I’ve watched a movie of his since his passing and really felt his loss. Frances McDormand can’t help but be excellent. Patrick Fugit and Kate Hudson give star-making performances (even all this time later, seeing him on screen in Gone Girl still prompted the whisper, isn’t that the kid from Almost Famous?). Rainn Wilson, Jay Baruchel, Nick Swarsdon, Eric Stonestreet and Mitch Hedberg all make “before they were stars” appearances, solidifying Crowe’s casting genius.

Almost Famous had triple the music budget of the average movie, and it was worth every penny. Peter Frampton was onboard to write music for the movie’s fictional band, Stillwater. But ultimately this movie hits home for a lot of us because it’s about discovery. Do you remember the first album you ever bought? Listening to a track obsessively? Memorizing lyrics? Calling in to your favourite radio station? Pouring over the liner notes? Music is the gateway to our growing up, and to witness William naive and wide-eyed bumping up against the most cynical of industries is a little like watching ourselves encounter the big bad world for the first time.