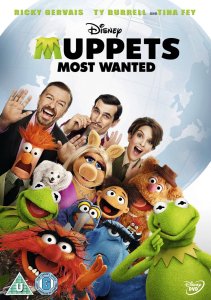 This movie picks up exactly where the last one left off, with a rousing musical number about how this is a sequel, and as we all know, the sequel’s never quite as good.

The gang is lured into a world tour by Ricky Gervais playing Mr. Badguy, an agent who’ll give them everything they want, but is secretly the number two to Constantine: world’s most dangerous frog (!). Constantine and Badguy are on a crime spree and are using the Muppets as a front, except for poor Kermit who’s been sent to a Russian gulag as a stand-in for his look-alike, Constantine. Jean Pierre Napoleon (Ty Burrell) and Mr. Eagle are on the case (Interpol, CIA), and as soon as Napoleon’s leisurely European 6 hour lunch break is over, they might actually solve it and save the day.

Gervais looks like his appearance in this film is court-mandated. He’s not having any fun and he 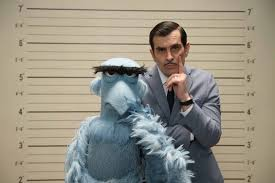 sucks the life out of all the scenes he’s in. Burrell is made for this stuff, and has actual chemistry with a big blue eagle. Tina Fey, playing the gulag’s strict warden, is the stand-out. The moment Kermit is rolled into the prison wearing a Hannibal Lecter mask, you know the Siberian scenes will be your favourite. Fey’s number “In the Big House” seals the deal; it’s the best of the bunch. And the fact that she’s backed up by doo-wopping prisoners played by Danny Trejo, Ray Liotta and Jemaine Clement wearing a crown of sporks just cements it. In fact, seeing Ray Liotta with wagging knees and jazz hands just might make the movie. The only problem with that is that these most cherished scenes are virtually muppet- 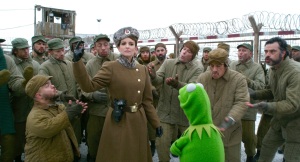 free, and if muppets are upstaged by humans in a Muppet movie, you’re sunk.

Bret McKenzie, (the other half of Clement’s Flight of the Conchords) is back again after winning the Oscar for his work on the first film (“Man or Muppet”, best original song), but the music has lost its lustre. It’s a lustreless film in general. Maybe we’re just missing the magic that Jason Segel brought, his fandom really breathed life into the franchise and nostalgia played high for us all.

Muppets Most Wanted is just as chock-full of cameos as the its predecessor. Blink and you’ll miss them: Tony Bennett, James McAvoy, the dude from Downton Abbey, Christoph Waltz dancing the waltz, Salma Hayek, Stanely Tucci, Zach Galifinakis, Puff Daddy. And the list continues! It feels a little like more time was spent on lining up cameos than thinking up plot, and that’s too bad, because on paper this film had all the potential of the 2011’s The Muppets, but this is a sequel, and as we all know, the sequel’s never quite as good.