Filmmaker Laura Poitras’ documentary on the scope of NSA wiretapping and surveillance worldwide is the first of the Oscar-nominated documentaries that I’ve had the chance to see. (Thanks Bytowne for making it available). Poitras was already working on the film when she lucked out and got an encrypted e-mail from the mysterious Citizen Four, who we all know by his real name Edward Snowden. Snowden met with Poitras and journalists Glenn Greenwald

and Ewen MacAskill secretly in a hotel room in Hong Kong where he provided them with proof of the extent to which the NSA had been spying on its own citizens. Poitras’ footage of thiese meetings take up a large part of the film’s running time.

If you’re unfamiliar with Snowden or his revelations, this is definately a movie worth seeing. And if you have taken the time to follow this story as it happened, you probably care enough to wan to see this movie given that it gives you the rare opportunity to watch history as it happens. So, in short, it’s a movie I’d recommend for anyone.

“I’m not the story!” Snowden repeatedly insists. It’s hard to tell if Snowden’s desire to focus on the message instead of the messenger is admirable or self-serving (I’m leaning towards admirable). Either way, Poitras often ignores this and wisely puts the focus on Snowden and the parts where she does are the best parts of Citizenfour. These scenes offer a rare chance to get to see a little bit of who he is. We’re with him when he gets e-mails from his girlfriend about agents showing up at her door. We’re even with him as he prepares to come forward, watching him as he fixes his hair and kills time in his hotel room. He keeps saying that he’ knows and accepts that there will be consequences but his body language can’t lie. We can see that he’s scared.

Being at the right place at the right time is a big part of what makes a documentary and, by that standard, Citizenfour is a great documentary. Poitras was fortunate enough to have Snowden 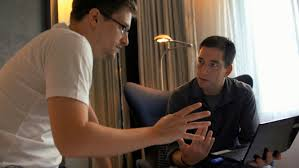 come to her and let her film him as he broke one of the biggest and most important news stories of 2013. It’s worth mentioning also that she was taking on some level of risk herself just by being involved.

I’m not so sure that Citizenfour is a great movie though. There’s not enough footage of Snowden to fill a full-length documentary and Poitras spends a lot of time scrambling to fill the rest. There are a lot of establishing shots, lots of text on the screen, and a few too many shots of Snowden sitting in his room watching tv. It feels like a missed opportunity, especially given that Americans are divided on whether Edward Snowden is a hero or a traitor. Poitras is leaning towards hero, maybe a little too heavily. She’s not wrong and documentaries certainly aren’t obligated to tell every side of the story. All I’m saying is, since Poitras had so much time to fill, maybe she could have filled some of it by asking him some questions.