When his mother dies, a successful big city lawyer returns his the small town to which he swore he’d never return. Despite vowing to leave first thing the next morning, his stay gets extended when his father (a respected judge in his community) is charged with murder. Father and son haven’t spoken in years and neither one likes the idea of working together very much but the 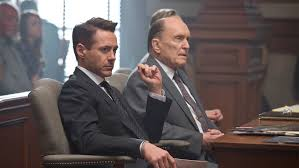 judge is going to need the best lawyer her can find to keep from going to jail.

Both the prodigal son and the courtroom drama are pretty played out so I wasn’t expecting anything great but when the father and son are played by Robert Duvall and Robert Downey Jr, I didn’t see how it could be bad.

More importantly though, nothing really satisfies. We have to wait until the end of the movie to find out what really happened, both between fath 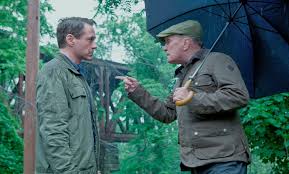 er and son and the night of the murder. And we should have to wait. All the best payoffs come that way. Our patience doesn’t pay off here though, neither with the family drama or the trial. Even Downey, the king of outalking someone, cross examing witnesses isn’t as much of a treat as it really should be.

The good news is that it’s not all bad. Robert Duvall is a nominee for this year’s academy award for Best Supporting Actor partly because he’s gotten pretty old and it’s been awhile since his last nomination but also because he is just pretty awesome. The best scenes in the movie are all his. His shower scene with Downey manages to be heart-wrenching, tender, and funny and I nearly cried in another scene where he meets his granddaughter. And even if Downey’s return home isn’t as compelling as I would like it to be, his return to real movies is more than welcome. He’s pretty much played no one but Iron Man or Sherlock Holmes for the last five years so even a drama as trite as The Judge is a nice change.

3 thoughts on “The Judge”