I suppose it’s inevitable that I’ve failed to relate to this coming of age comedy about a young girl in high school who’s utterly obsessed with snogging. More alienating than the age difference is my absolute distaste for the word snogging, which is repeated so often in the film that my stomach acid has stripped away the mucus lining of my throat after throwing up in my mouth so frequently.

In fact, I do not care at all for kissing in films because I really cannot abide the sound effects attributed to it. You can hear the spit. It’s all spit. It’s slurpy and damp and you can just hear the strings of saliva between open, bacteria-ridden mouths. It grosses me the fuck out. Which is weird because I don’t really mind it in person. But as in many things, real-life kissing is almost nothing like movie kissing, and if done reasonably well, and 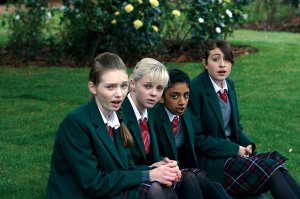 with the avoidance of too much tooth contact, it’s never nearly as noisy. So I already know that I hate kissing scenes in movies. And poor Georgia wants nothing more than kissing all the time. Scratch that. She wants snogging, because she’s British and therefore had to come  up with a gross word for it that ruins it for the rest of us. I mean, first of all, snogging has always sounded to me like rather more than just kissing. In fact, it pretty much sounds like the whole enchilada. The whole kit and caboodle. But no, snogging is what twerpy little teenage girls do to the backs of their hands at sleepovers and such. Georgia is sadly snog-free at this stage in her life, but she’s devoted herself (at the expense of school, friends, and family, naturally) to correcting this void. And wouldn’t you know it: the eminently dreamy Robbie moves to town, and is the perfect target for all her lusty fantasies (which mostly involve running uphill???).

Angus is just about the only thing that I don’t despise in the film. Angus is Georgia’s long-suffering cat. Normally I don’t go in for cats, but Angus tolerates dog-levels of indignity – tea parties, costumes, even getting pretend-lost so that Georgia and cat-loving Robbie can share a moment or two searching for him.

The other thing that director Gurinder Chadha gets right is casting a very young, very floppy-haired Aaron Taylor-Johnson (who of course isn’t going by that yet) as dreamboat Robbie. It is quite arresting to see him so young and smooth-faced in this film after so recently having seen him waggle his penis about in A Million Little Pieces, and bare the madness of his soul in Outlaw King. I know I complained about all the brutal horse murder in the latter, but it turns out that the slaughter of innocent animals is easier for me to cope with than the sound of perfect snogging.