Back in December, I reviewed Mysterious Skin, Looper, and Sin City: A Dame to Kill For and

made no secret of my Joseph Gordon-Levitt bias. It all started with Brick. I exited the theater when I first saw it back in 2006 certain that this was an actor to watch out for and refusing to listen to my friend’s allegations that this was in fact the same kid from 3rd Rock from the Sun.

Watching it again nearly a decade later, Brick feels a bit like a feature length high school video project- complete with an extremely low budget and a high school serving as the unlikely setting for a Maltese Falcon-style detective story. JGL plays a loner named Brendan who must navigate the seedy underworld of his school to solve his ex-girlfriend’s murder. The dialogue, music, and twists seem to come from a bizarre 40s noir. Instead of a meddling cop, we get a nagging vice-principal.

Just like in the Leonardo DiCaprio version of Romeo and Juliet, first time writer-director Rian Johnson (who JGL later worked with again on Looper) relies on the anachronisms in the discourse to make an old story feel new. This gives him an excuse to tell a pretty straightforward detective story without it feeling like just another detective story. I’ll admit his style takes some getting used to and I was completely thrown off at first back in 2006. But once you get the hang of it, it’s easy to get caught up in Johnson’s surreal picture of a modern high school. Sure, they don’t talk like real teenagers but they never do in the movies anyway. At least Brick is fun to listen to. 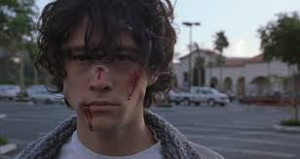 Brick runs just a little bit longer than the novelty of Johnson’s gimmick and there are a couple of times too many where he uses self-parody as a bit of a crutch. The film really works best when it’s reminding us that the darkest of secrets can be hidden within the walls of our publc schools. You’ll either love the film’s style or you’ll hate it but JGL sold it for me. He always strikes just the right note and, like the movie itself, has one foot in the past and the other in the present. He has the look of a modern troubled teenager with the soul of Sam Spade. Nearly a decade later, I am still always looking forward to his next project.