Watching a movie on an airplane isn’t exactly optimal viewing conditions. No director plans a scene thinking “But how will this look on a teeny tiny screen located approximately 15 inches 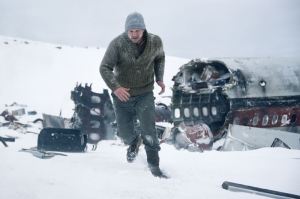 from your face?” And putting the volume control on a shared arm rest is just asking for trouble. But you persist, because flights are long and seats are uncomfortable and for the love of god you’ve got to do something to block out the noise coming out of that baby. Of course, you must choose your movie well. I know someone who watched The Grey on a plane: not a wise choice. Weird of the airline, I thought, to even offer it, but apparently it did come with the too-mild warning of “not suitable for nervous fliers.” In The Grey, Liam Neeson barely survives a horrific plane crash only to have his life further threatened by a really spiteful pack of wolves.

Here were by recent choices, for better or worse:

The Skeleton Twins: Estranged siblings played by Kristen Wiig and Bill Hader reconnect after one’s attempted suicide interrupts the other’s. Comedies are good choices for planes and both

Wiig and Hader give really strong performances although beware, this one is rife with family drama. They have an ease and charm together that’s really engaging, though the movie does suffer from the worst aspects of SNL – a tendency for a skit to go on way too long. So if you find Bill Hader lip-synching to an 80s power ballad, you’re in it for the full 3m48s and you’ll cringe through every second.

X-Men: Days of Future Past: This one mostly confused me. Sean really liked it and I’m sure a

glowing review is imminent. He’s explained to me that this one was basically correcting a crappy previous film, but I struggled to keep up not just with the fast pace, which is appropriately engrossing for a plane ride, but with mutants I wasn’t familiar with interacting with mutants who I was pretty sure had already been killed off. I know this movie is time-warpy and rule-bendy, but does it also have to be a complete mind fuck? I’m suffering from super-hero fatigue (probably have been for at least a decade), but I really liked James McAvoy. And really hated Peter Dinklage, as usual. But the bits where Quicksilver is doing his thing almost make the movie worthwhile on their own – this is Bryan Singer at his best.

Alexander and the Terrible, Horrible, No Good, Very Bad Day: I had the feeling that I’d already seen this family feature like half a dozen times. I’ve never seen this one before, but it feels like a pretty uninspired copy, so you try telling it apart. Lots of horrible\”funny” things happen to a

family on what I hope is an atypical day. You know it’s supposed to be funny because Steve Carrell is flailing about on fire, but it doesn’t quite evoke out-loud laughter. I happened to be watching this on the very same day that Carrell would walk the red carpet as an Oscar nominee and it’s kind of nice to see that it hasn’t gone to his head. He’s still making room for bad movies. Well okay, it’s not terrible. It’s horrible and terrible and no good. But it’s also Steve Carrell (and a game Jennifer Garner) doing physical comedy with full gusto. Steve Carrell doing goofball antics just plain goes down easily so while you know this movie is mediocre at most, you just can’t bring yourself to hate it. A pirate accent forgives a lot.

3 thoughts on “Movies on Airplanes”